Your Friend the Rat

BURN-E
Presto is a 2008 Pixar computer-animated short film that was released in theaters alongside WALL-E.

Doug Sweetland made his directorial debut with this short and also voices its two main characters―Presto DiGiotagione and Alec Azam.

This short is about a magician named Presto DiGiotagione and his cute and hungry rabbit Alec Azam.

At the beginning of the short, Alec is seen locked in his cage in Presto's dressing room, trying to reach a carrot inches out of his reach. Presto comes in, having finished a meal, to test his magic trick of pulling Alec out of a hat. After he sees that the trick works, Presto is about to feed Alec the carrot, just as he hears a knock on his door, letting him know that it's time for him to go on stage and do his act.

Presto then rushes onto the stage to begin his act, leaving Alec thinking that he will be fed the carrot. When Presto tries to perform the trick on stage, he cannot find Alec, then looks to see that Alec had taken the hat off. Agitated, Presto tries to reach Alec, but ends up pulling a mousetrap out of the hat instead. To try to get Alec to put the hat on, Presto throws an egg into the hat, only to have it bounce up and hit him in the eye. Presto then makes a carrot appear and puts on the hat used to grab Alec. He then turns the carrot into a flower, making Alec angry and prompting him to put the other hat into an air pipe, making Presto's face red and his hair sticking up.

Becoming increasingly frustrated and angry, Presto tries to get Alec once again, but he gets his pants ripped off. He then sees a ladder and attempts to hit Alec with it, but instead is hit by the ladder as it shoots out of the hat. Frustrated, Presto presents the carrot again, but proceeds to smash it with a piece of the ladder, making Alec scream. Presto once again tries to grab Alec, but Alec sticks his hand into an electrical socket, shocking Presto.

Now extremely angry, Presto chases Alec behind the stage and gets pulled by a rope into the air, but soon slips and falls with many heavy objects falling above him. Alec then saves Presto from being crushed by making him fall into the hat.

After a short pause, the crowd begins to cheer for Alec and Presto. Alec, in a bad mood, begins to walk away when Presto beckons him to come over. To cheer Alec up, Presto makes the carrot appear again, which Alec immediately eats when he comes out of the hat. They end the show as friends and Alec becomes an even bigger part of Presto's act.

Presto was directed by veteran Pixar animator Doug Sweetland in his directorial debut. Looney Tunes cartoons were a major influence, with Alec being easily compared to Bugs Bunny. The character design for Presto was based on William Powell.

Animating the theater's audience of 2,500 patrons proved an expensive proposition, even with the help of the crowd-generating Massive software. Early suggestions were to show cutaways of just a small portion of the audience, but the full effect was achieved by only showing the back of the audience. To save time, most of the audience models were borrowed from the previous Pixar film Ratatouille. Additionally, Presto's body is Skinner's lawyer and the carrot was one of the many food props from that film. 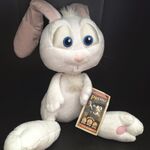 A plush of Alec Azam