Prince Charming Regal Carrousel (formerly Cinderella's Golden Carrousel) is an authentic 90-horse carousel in Fantasyland at the Magic Kingdom at Walt Disney World Resort. Similar attractions under varying names can be found at two other Disney Parks including Tokyo Disneyland as Castle Carrousel and Hong Kong Disneyland as Cinderella Carousel. The calliope plays organ-based Disney classics during the two-minute ride period. Hand painted scenes from Disney's Cinderella can be seen on the top.

The carousel was originally built by The Philadelphia Toboggan Company, one of the most prestigious carousel companies, in 1917. In 1967, Walt Disney purchased it from Olympic Park in Maplewood, New Jersey. Its original name was "Liberty Carousel", and the maidens can still be seen on the top. Every horse is different.

There are conflicting stories regarding whether one of the horses on the carousel is "Cinderella's Horse". The one in question is in the second rank, and is the only one that has a golden bow on its tail.

Cast members refer to this horse as Cinderella's and it has been referred to as such in various Disney publications. Cinderella has been depicted as riding a horse in various pieces of collectable sculpture and artwork, such as a 2001 Limited Edition lithograph.

However, in an interview with Isle Voght, a cast member responsible for restoring the carousel along with John Hench, she gives her own reasons for doubting the veracity of the Cinderella's Horse story, namely that Cinderella would not have a horse on an inner row, and that hers would be decorated much more elaborately than the others. Also, she states that Cinderella never rode a horse in the film.

The Disney Imagineers did not include the story of Cinderella's horse in the 2010 rewriting of the carousel backstory.

On June 1, 2010 the name was changed from Cinderella's Golden Carousel to Prince Charming Regal Carrousel. The name change helps tell the rest of the Cinderella story that inspired it. Here’s the official story behind it: "Following their fairy tale romance and happily-ever-after wedding, Cinderella and Prince Charming took up residence in Cinderella’s Castle. With peace throughout the kingdom, Prince Charming had time to practice for jousting tournaments. In the countryside near the castle, he built a training device of carved horses, on which he could practice the art of ring-spearing, a tournament event in which a knight rides his horse full speed, lance in hand, toward a small ring hanging from a tree limb, with the object of spearing the ring."

This event was known by various names throughout the lands, but generally came to be called "carrousel".

The carousel device drew the attention of the villagers, who wanted to take a turn on this amazing spinning contraption. So Prince Charming had a second carousel constructed closer to the castle, where everyone could take a spin on this wondrous invention. Instead of a working knight’s training device, however, this new carousel is more befitting its regal location in the Castle Courtyard – its rustic training horses replaced with ornately decorated prancing steeds adorned with golden helmets and shields, flower garlands, feathers and other festoons. Prince Charming invites one and all to test their horsemanship skills and to enjoy their own happy ending.

The carousel was built by Chance Rides of Wichita, Kansas. It came with four rows of Bradley and Kaye horses and Columbia chariots. 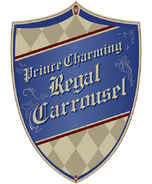