2009–present
Geoffrey Royce Rojas, better known by his stage name Prince Royce, is an American singer, songwriter, actor, and voice actor. He is known for creating several albums, such as his self-titled debut album. He also guest-starred as himself on TV shows, such as La Voz Kids and Pequeños Gigantes USA. In July 3, 2020, he stated that he tested positive for COVID-19.

For Disney, he voices Prince Marzel on the Disney Channel/Disney Junior animated series Elena of Avalor. 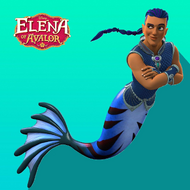 Prince Marzel
(Elena of Avalor)
Add a photo to this gallery

Prince Royce poses in the press room at the 2017 Latin American Music Awards.
Add a photo to this gallery
Retrieved from "https://disney.fandom.com/wiki/Prince_Royce?oldid=4394445"
Community content is available under CC-BY-SA unless otherwise noted.