English
Princess Academy was to be an animated short that would have featured all the female characters that debuted from the films that came after Snow White and the Seven Dwarfs all the way up to Tangled, including Pixar films, Who Framed Roger Rabbit, and The Nightmare Before Christmas.

In May 2009, production started for the film.[1] In August 2012, eight-time academy award winning composer Alan Menken agreed to work on the project, as long as it would be greenlit by Disney in the future.[2] In March 2013, Disney completely gutted their hand drawn animation department, firing almost all of their veteran 2D animators. This was a shock to Kawena and Ciappa, who had been working on The Princess Academy for years now. As stated by Kawena: “After months working on it, with hundreds and hundreds of storyboards and concept art, the Disney Animation hand drawn studios closed its doors. So there was no point for us to even show that project.“ With no other options, the film was cancelled.[3] 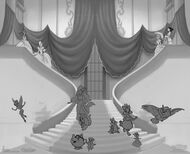 Another take on the Tea Party sequence, this time in the background: Jane Porter, Captain Amelia and Megara. In the front: Wendy Darling, Aurora, Little Girl, Mrs. Potts, Alice, Alice's Sister and Anita.