Prince James being a bad sport, being sick

Her parents are Emperor Quon and Empress Lin-Lin, her little brother is Jin, and they are the Imperial Family of Wei-Ling. Jun has a very good memory, recalling old stories from her mom and able to describe the various statues in her garden. She's a very talented bamboo flute player, able to even calm down lagoon lizards and get a ride from them. She has a playbook for Dazzleball in her possession that she tried to get Amber to read and usually failed to her annoyance.

Jun made her debut in the series premiere and is portrayed as a minor character throughout the series. She is often seen hanging around with her friends and her brother Prince Jin.

Jun's first major role came in "Princesses to the Rescue!". Jun became worried about her brother when she heard about the Jade Jaguar but agreed with her father that she should let the men handle it. However, in the end, she agreed to go with Sofia who, with Mulan's help, taught her she was stronger than she thought. With Mulan's help, Sofia, Amber, and Jun managed to rescue their brothers and fathers.

Miss Fauna impressed with Jun's copy of her dress

Jun dressed as a leopard/cheetah

Promo for episode 'The Bamboo Kite' 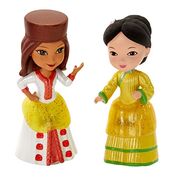