Tom (husband)
Princess Katharine is a character from the Disney animated TV show, Gargoyles. She is the granddaughter of Malcolm I of Scotland through his third son, Prince Malcolm, and Princess Elena.

Upon her father's death, she became the lord of Castle Wyvern during the 990s. She was at first prejudiced against the gargoyle clan, thanks in part to her father using them as bogeymen to make her behave, and also due to the advice of the Magus and general prejudices of the time. However, after Goliath saved her from Hakon and her traitorous Captain, she finally realized the error of her ways against the gargoyles. She felt more guilty how she had treated them upon learning the rest of the Wyvern Clan had been destroyed and the remaining gargoyles had been turned to stone by the Magus in his grief in thinking Katharine had been killed by Hakon before discovering Goliath saved her. She vowed and promised Goliath to protect the clans' unhatched eggs as her way of making up for how she had treated them in the past.

Fleeing from the now-abandoned Wyvern, Katharine, the Magus, and Tom traveled to the castle home of her uncle, King Kenneth II, who welcomed them and the eggs with open arms. Unfortunately, this arrival placed them into the midst of a political struggle, as a devious lord of Kenneth's court, Constantine, assassinated the king and usurped his throne. He had then planned to cement his claim by marrying Katharine. If she refused, he intended to destroy the eggs.

Katharine and the Avalon Clan, with the help of a local princess Finella, escaped Constantine and fled to Avalon, their last area of the sanctuary, but the Magus had to leave The Grimorum Arcanorum with Finella and Tom's mother Mary as it was prohibited from entering Avalon with him. The eggs hatched and she raised them on Avalon as her own children. During her time on Avalon, she fell in love with Tom, the guardian of the eggs, whom she knighted with the title before fleeing Castle Wyvern.

Eventually, Katharine and Tom married and raised the Avalon Clan's gargoyles as their children. The Archmage attacked and she, along with the remaining members of the Avalon Clan (and Goliath, Elisa, and Bronx), defended Avalon, leading to the Archmage's destruction, but the Magus died after using up his strength defeating the Weird Sisters and was buried in the tomb where King Arthur had slept.

Katharine remained on Avalon with the Avalon Clan until Avalon brought Goliath, Elisa, Angela, and Bronx back to its shores in order to deal with the return of Fae King Oberon and Fae Queen Titania. When Oberon agrees to face Goliath, Angela, and Gabriel in competition at reduced strength to decide if the Avalon Clan would be permitted to stay on Avalon or be exiled, if not destroyed, by the suggestion of Titania, Katharine formulates a plan with Elisa and Tom to use Oberon's vulnerability to iron against him, using the chains that the Magus had tied up the Weird Sisters with to forge an iron bell to use against Oberon. Even when Tom has Oberon on his knees and at his mercy, he chooses not to finish the Fae King off, considering it dishonorable to kill an opponent on their knees. Impressed by this, Oberon allows the Avalon Clan to stay, making them his honor guard, thus allowing Katharine and the clan to stay on Avalon to coexist with Oberon and Titania in peace. 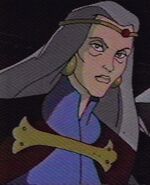