Disney Wiki
Register
Don't have an account?
Sign In
Advertisement
in: Characters, Elena of Avalor characters, Females,
and 14 more

Tacos, walking on land, helping her friends, peace between humans and sirenas

Humans and sirenas fighting with each other, seeing Elena in trouble, being caught in a net

Prince Marzel (older brother)
Princess Marisa is a Sirena princess who appears in the Elena of Avalor special, "Song of the Sirenas".

Many years ago before Marisa was born, the Sirenas used to sink human ships. However one day, Marisa's father, King Pescoro of the Sirenas, saw a woman named Camila drowning. Feeling guilty, Pescoro saved her by wrapping her in magical kelp that turned her into a Sirena, and the two fell in love. From that day on, the Sirenas never again sank human ships.

Due to Marisa's mother, Camila, being originally human, she and her brother, Marzel, are half-human and half-Sirena, allowing them to turn their tails into legs when they are on land.

Marisa makes her debut appearance in the special "Song of the Sirenas". She has her first encounter with Elena and her family when she, her brother Marzel, and Coco are spotted by the Avalor Royal Yacht and fired on by Naomi Turner's parents. Following after seeing Elena intervene on their behalf, Marisa decides to tell what happened to their parents, King Pescoro and Queen Camila. However, after hearing it, Pescoro and Camila ask that Marisa stay away from Elena and her family. Unconvinced because of what she saw with Elena, Marisa goes to Nueva Vista, and luring Elena to her with her singing, she has a chance to speak to the Avalor Crown Princess, asking her to convince the people of Nueva Vista that the Sirenas are good now since they have not sunken any ships for some time now. Believing her, Elena tries to get her cousin, Duke Cristobal, to meet Marisa, only to watch as Cristobal tries to capture Marisa, but with Coco and Marzel's help, Marisa escapes and is sternly reprimanded by Marzel for her attempt. However, when Marisa finds Elena on the verge of drowning following being bested by Shuriki and Fiero, she uses the same kelp that saved Camila to grant Elena the ability to breathe underwater, but not turn her into a Sirena. Afterward, she takes Elena back to Coronado to speak with Pescoro and Camila, but they reveal their reasons for not wanting to become friends with Elena by revealing that Marisa was nearly kidnapped by fishermen when she was younger due to them mistaking her for a human instead of a Sirena. Unable to sway their minds, Elena returns to Nueva Vista, only to be captured by Cristobal, revealed to be in alliance with Shuriki. Marisa tries to help but is captured as well and imprisoned with Elena and her family. However, they are broken out by Naomi, Gabe, Mateo, and the Jaquins, and attempt to escape to Avalor City on the Royal Yacht, but are pursued by Shuriki and her crew. Luckily, Pescoro and Camila arrive with the Sirenas, having been warned by Marzel when he saw Marisa get captured, and after rejoining her family, Marisa helps crash Cristobal's yacht into the sea wall of the palace. After Elena defeats Shuriki for good, she has Cristobal locked up for his treason and forges a new alliance with Marisa, her family, and the Sirenas.

However, there are still those who are against the newfound friendship and alliance between Elena and Pescoro. Chief among them being Pescoro's Captain of the Royal Guard Daria, and Naomi, who harbors a grudge against the Sirenas for sinking her grandfather's ship before she was born. Daria attempts to ruin the treaty signing by allying with the sworn enemy of the Sirenas of Coronado, the malandros, led by their leader, Saloso, by shutting off the Coral Alarms that keep the malandros at bay. However, once they can enter Coronado, Saloso and his cronies destroy the Coral Alarms and take over. Repentant for her actions putting Coronado in danger, Daria asks Elena for help with Marisa and Marzel, but while Naomi refuses to aid them because of her personal grudge, Elena agrees to help with Gabe and Mateo, and barely manages to use the Scepter of Light to regrow the Coral Alarms in time for them to repel and force Saloso and his malandros into retreat, swearing they will be back for revenge. As a result, Daria is forgiven for her actions, Naomi agrees to let her personal grudge go for the good of everyone, and the treaty is signed.

Later on, Marisa discovers that her father has sprained his tail after being rescued from a shipwreck he was trapped in by Elena, Marzel, and Ocho. With Pescoro unable to attend the summit Elena is holding with the other kings in the Ever Realm, he asks Marzel to go in his place while Marisa stays with Pescoro to tend to her father's injury. However, Elena and Marzel return later with the bad news that Marzel had unintentionally turned the other kings into Sirenas when he took them through the Maligras Garden, which was forbidden, and their legs were tangled in the magical seaweed, causing them to be turned into Sirenas as a result. Although Pescoro believes that reversing the transformation is impossible, Marisa reveals that there is an island some distance away from Coronado and Nueva Vista that grows flowers that, when eaten, can reverse the Sirena transformation before it becomes irreversible when the tails stop glowing. When Elena and Marzel return later, they reveal that Marzel was able to reach the flowers and return the other kings to their human selves, making Marisa and Pescoro very proud of Marzel. They allow Marzel to spend some time on land with Elena and the other kings to help further improve relations between Coronado and the other kingdoms. 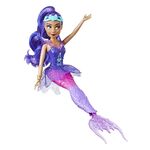