Disney Wiki
Register
Don't have an account?
Sign In
Advertisement
in: Characters, Sofia the First characters, Princesses,
and 15 more

Sofia the First: Once Upon a Princess (cameo)

Vivy (by her parents)
Viv (by Crackle)

Talking to others (formerly), getting nervous, running, having her talent stolen

Crackle (dragon)
Princess Vivian is a recurring character in the Disney Junior series Sofia the First.

Vivian is a shy girl who has trouble talking to other people, and as a result had no friends. There were also many false stories made up about her, that she was never able to say weren't true because she wasn't brave enough to say so. But after being partnered with Sofia for a project for art class, the two of them eventually became best friends and Sofia helped Vivian become more confident, and overcome her fear of being around and talking to others.

Vivian is musically talented and her favorite instrument is the mandolin, though she is able to play any of the instruments kept in her music room. She is also a talented painter and has a hyperactive, baby blue dragon named Crackle.

In her debut appearance, "The Shy Princess", Vivian first met Sofia when she partnered with her for the dream castle project in art class. Practically invisible because she was terribly quiet and shy, Sofia was not even aware of Vivian's existence beforehand. Sofia came over to her castle, where she was greeted by her mother, to work on it. There Vivian revealed that she knew all about the rumors the other girls were spreading about her but due to her shyness, was unable to say anything to them about it, nor were they aware that she was usually in their presence when doing so. She was also shown to have a love of music, as her castle's music room was her favorite room. She played the mandolin while Sofia sings and slowly gains more confidence, eventually singing with her new friend. But Vivian was still scared of Amber and the other girls, and during lunch, ran away when they approached the table she and Sofia are sitting at. When Sofia visited her castle to make sure she's okay, Vivian seemed to have lost her confidence and said Sofia should do all the talking when they presented their project. But Sofia suggested instead of talking about their castle, they could sing about it instead while Vivian played her mandolin. This idea worked out perfectly, and in the end, Vivian's musical talent was praised by the other girls, and Amber even said she would like to be friends with her. Clio suggested Vivian join the school band due to her musical talents.

Throughout the first season she made minor appearances and by the time of "Princess Butterfly", she became part of a school band that played for the All Hallows Eve Ball, alongside Prince Desmond on the accordion, apparently having followed Clio's advice. During the second season, Princess Vivian had more active roles in later episodes and began to show a part of herself where she was reckless and disobedient, specifically in episodes "Enchanted Science Fair" and "Scrambled Pets", where she got aggressive and competitive with her friends during a science fair project, and disobeyed school rules about bringing pets into class.

In the third season, Vivian has to move from her original castle into a new one, making her very unhappy about having to leave her music room. At first, she tried to use Sofia's Wee Sprite friends to scare her parents out of the castle, but with a little help from Sofia, she came to love her new home. After getting the Wee Sprites out, she showed her parents the enchanted garden that came with their new home and declared it her new favorite spot in the whole world.

"You've been there for us. Let us be here for you."

"I can use my Magical Music on them." 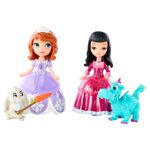 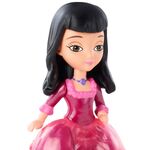 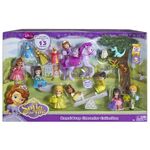 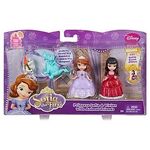