Disney Wiki
Register
Don't have an account?
Sign In
Advertisement
in: Characters, Theme park characters, Pirates of the Caribbean characters,
and 11 more

Pirates of the Caribbean
Battle for the Sunken Treasure (skeleton)

The Prison Dog is a character from Pirates of the Caribbean, originating in the original theme park attractions in which he is seen holding keys in his mouth near some imprisoned pirates, who attempt to lure the animal closer to no apparent avail.

The Prison Dog was a domesticated dog which was found in the Castillo del Morro fortress of Isla Tesoro. The dog was left with the keys to the cells in the fortress prison. When the island was raided by the crew of the Wicked Wench, the fortress was one of the buildings set on fire with its piratical prisoners desperately attempting to lure the dog to their cell to escape.

Pirates of the Caribbean (film series)

In the films, the dog was a prison dog in the Fort Charles prison of Port Royal in Jamaica. It would come to be dog-napped by Pintel and Ragetti before it was abandoned on Isla de Pelegostos. Later on, it would come into the ownership of Captain Edward Teague, being used to hold the keys for the Pirate's Code.

Artwork of the dog by Marc Davis is hung in the RV Oceaneer Lab as part of Captain Mary Oceaneer's collection.

In each version of the attraction, the dog is seen near three pirates attempting to get his attention to free them.

Due to the success of the attraction at Disneyland, the Pirates of the Caribbean attraction was later constructed at Magic Kingdom, Tokyo Disneyland, and Disneyland Paris where it still features the prison scene still with the dog.

Battle for the Sunken Treasure

The scene where guests pass through the caverns scene with three pirates and the prison dog was redesigned where the dog and the prisoners appear, but are shown as dead skeletons. The whistling audio from the original attraction plays during this vignette.

The prison dog is the keeper of the keys to the jail in Port Royal, he carries the keys in his mouth, the prisoners vainly trying to get the keys.

After the raid on the town under attack by the Black Pearl, Jack tries to get the keys from the dog and almost does, but when other pirates come into the jail, he gets scared and runs off.

The dog appears again in Dead Man's Chest with Pintel and Ragetti after they have escaped prison and are headed for Pelegosto to search for the Black Pearl. He was named "Poochie" by Pintel until he was left on Pelegosto. Later, he was chased by cannibals. In a post-credits scene, it is revealed that the dog becomes the chief of the Pelegosto tribe.

In At World's End, the dog is the keeper of the Pirata Codex keys on Shipwreck Island. Captain Teague explains the dog's presence by saying, "Sea turtles, mate," a reference to Jack Sparrow's tale of his own escape from being marooned.

The Price of Freedom

In this movie-continuity book, the dog was the pet of Captain Teague long before the events of the first film when Jack Sparrow was a teenager. Jack had the duty of feeding the dog, in doing so giving the dog a taste for rum. When Jack's friend Christophe-Julien de Rapièr was accused of going rogue from the brethren, Jack and his ally Esmeralda stole the dog's keys to free him and escape Shipwreck Island.

The dog makes cameo as a background character in the "Sultan's Dungeon" level.

The dog is a playable character within this mobile-game.

The dog appears in the dungeons of Puerto Dorado (here a pirate haven frequented by Blackbeard) where starving prisoners try to pry its key from its jaw. The player tosses food to the prisoners before their guide Black Barty makes a comment about having run afoul of the dog before and how it would never give up its keys.

The dog first appears in this game, keeping the keys for the jail-cell that Jack Sparrow is kept in. The dog can also be purchased as a pet at the Pirate Emporium.

The dog crowned a chief.

A plush of the dog from the Disney Wishables line

The dog in the Genesis version of Aladdin 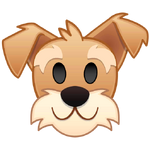 in Sea of Thieves: A Pirate's Life