Light and dark green car with a large monocle over his windshield, and gray eyes

To destroy the World Grand Prix, and kill Mater and Lightning McQueen (failed)

Gets tied up by Finn McMissile, tasered by Holley Shiftwell, and arrested by the police in London for his actions

"It's Finn McMissile! He's seen the camera! Kill him!"

"This camera is extremely dangerous."

Professor Z, short for Zündapp, is the secondary antagonist of the 2011 Disney/Pixar animated film, Cars 2. He was promoted to be the main antagonist, but it turns out he is one of Miles Axlerod's henchmen.

Professor Z, aka "The Professor," is an internationally-wanted weapons designer in a small, sophisticated German package. He is a brilliant but mad monocle-wearing scientist who is plotting to sabotage the World Grand Prix. Though his true motive is unclear, Professor Z is willing to do whatever it takes to eliminate all obstacles and keep the "project" on schedule.[1]

Originally, Professor Z was not added into the story of Cars 2, nor was Axlerod, as the filmmakers were supposed to use a Russian character named Zil. Zil would have been the lemons' leader, and try to get the world to put alternative energy out of use. However, the filmmakers decided not to use the character, and use Professor Z and Axlerod instead.

Professor Z is considered by others to be evil, greedy, ruthless, devious, intelligent and mad. Occasionally, he speaks German, such as "Wunderbar", meaning "marvelous", "terrific" or "wonderful"; and "Guten Tag", meaning "Good day." He is also considered a genius, as he knows about what the lemons' electromagnetic pulse generator can do. He is deemed evil for trying to make the world turn against clean energy, as well as aiming to kill anyone who knows about the lemons' plot or unknowingly does something that is against the plot.

Professor Z is painted both dark and light green. The dark green shade covers the middle of his sides, beneath his windows, and goes down to his bumper at the front. The light green shade covers the rest of his body, including beneath the dark green shade on his sides. He has gray eyes, and wears a monocle over his left eye. He also has a broken roof rack, which represents a comb over. He is modeled after a 1957 Zündapp Janus, which is a very small car that has passengers in the back seats facing the opposite direction. His license plate reads "BAD GA 58", which includes most of the letters spelling "bad guy"; and the year 1958, which is the second and final year when the Zündapp Janus was built. German license plate rules state that the first 1-3-letter abbreviation represents the city where the car registered. "BAD" is assigned to his hometown, Baden-Baden.

Professor Z is introduced on one of the oil rigs that has been owned by a group of lemons. He and the lemons have been secretly making a weapon that is disguised as a television camera, planning to sabotage Miles Axlerod's racing competition called the World Grand Prix. Before the weapon is loaded, Professor Z takes one last check, so to make sure it is secured correctly for the lemons' voyage. Just then, Grem and Acer show him the remains of secret agent Leland Turbo, who they had found hiding on the oil rig. Moments later, a shadow is cast on the ground, and Professor Z looks up to see Finn McMissile, who had secretly been watching them the whole time. Immediately, Professor Z orders the thugs to kill him. It has not been easy, but Grem, Acer and Professor Z soon believe that they have killed Finn, not knowing that Finn had actually faked his death.

Soon, Professor Z and the lemons make their trip to Tokyo, to watch Axlerod on stage with the press in the National Art Center. During the World Grand Prix opening ceremony, the lemons find out that an American secret agent named Rod "Torque" Redline had been using a disguise while he was with Professor Z back on the oil rigs, and take him to their lair. At this point, Professor Z reveals to Rod that the lemons' weapon is an electromagnetic pulse emitter, which is designed to make Axlerod's unique fuel, Allinol, explode when coming into contact. The lemons' plan is to use it on the World Grand Prix racers while they are taking part in each of the races. While he is explaining this, Grem uses the weapon on Rod, and Acer demands to know if Rod had given anyone a device with a photo of someone known to be their mastermind. Professor Z is able to catch Rod's reaction when Acer demands to know if Mater has the device, and orders the lemons to find and kill Mater, while killing Rod himself with the weapon on full power.

After the first race ends, Professor Z and the lemons travel all the way to Porto Corsa to gather up for a secret meeting in the town's casino. Appearing on multiple televisions, the professor and the lemons listen to the mystery mastermind, who reminds them about when they were always laughed at, and mentions to them about planning to pay the world back by making several of the World Grand Prix racers crash as a result of their fuel exploding from coming into contact with the lemons' electromagnetic pulse emitter. This is to make the whole world go against alternative fuel and purchase regular oil, in which they will be forced to buy the oil from the lemons thanks to their huge oil reserve, so that the lemons will have wealth and power. Meanwhile, Grem and Acer are using the EMP generator to make a huge pile-up on the race track, resulting in Axlerod announcing to the press that the last race in London will not be run on allinol. Cheering for this, Professor Z and the lemons celebrate for their future. However, this is soon stopped when they hear one of the racers, Lightning McQueen, confirming that he will use allinol in the last race. With a phone call from the mastermind, Professor Z makes a plan to have McQueen killed in the last race. At that moment, they all spot Mater after his Ivan disguise turns off, and get ready to shoot at him. Mater is able to hold them off with his own guns that are activated by voice command, and escapes the casino to try and warn McQueen. However, Professor Z and the lemons manage to capture him, along with Finn and Holley Shiftwell, before he can get to McQueen.

Professor Z and the lemons then travel to London to get ready for their plan, while also having Mater, Finn and Holley tied to the gears of Big Bentley. As the race begins, Professor Z, J. Curby Gremlin, Tubbs Pacer, Victor Hugo and Vladimir Trunko all watch from inside a glass-fronted building, feeling excited as Grem and Acer prepare to kill McQueen with the electromagnetic pulse emitter on full power. However, McQueen does not explode, which is because Sarge had switched the allinol in McQueen's fuel tank with Fillmore's organic fuel. Unsure of why there was no explosion, Professor Z informs Grem and Acer that they must go to their back-up plan. Grem and Acer mention to Mater that the back-up plan is to have a bomb inside McQueen's pit explode just when he will make a pit stop. Mater is able to get free and rush to the pits to warn his friends, but Finn and Holley then radio him that the lemons have actually put the bomb in his air filter. At that moment, McQueen comes into the pits, feeling happy to see Mater again, just as Professor Z prepares to detonate the bomb. However, Mater tries to save his best friend by driving away, leaving Professor Z unimpressed. Moments later, Professor Z sees his chance once again when McQueen goes after Mater and grabs onto him. Professor Z then presses the detonate button, but sees on the remote that the bomb is out of range, because Mater activated his rockets, making him go at a high speed. Enraged, Professor Z repeatedly presses the detonate button, but to no avail. Just then, he notices Holley outside the window threatening to shoot at him, causing him to flee, while the lemon families decide that they have to go after Mater and McQueen.

Trying to get away, Professor Z races through London and to the River Thames to get picked up by a battleship named Tony Trihull, just as Finn arrives and attaches his grappling hooks to the professor. However, as Finn tries to hold back, Professor Z gets the upper hand when Tony uses his magnet to pull the scientist toward him, also getting Professor Z's monocle stuck to the magnet. Eventually, Finn defeats Tony by releasing small explosives that stick to the magnet and kill Tony, making Finn able to prevent the professor from escaping. Getting tied up, Professor Z is taken to a spot where Holley, Mater and McQueen are located. Seeing McQueen, Z demanded to know why his death ray didn't kill him as the latter was shocked to hear the mention of a death ray. Finn then told Z to turn off the bomb stuck on Mater. The scientist mentions that the bomb is voice-activated, but when Mater tries to shut it off he fails. Z then mentions that it can only be turned off by the one who had turned it on.

Holley threatens him to turn it off, he obliges but it fails as well and he reveals that he did not activate it, and after jokingly asking everyone else if they want to try and deactivate, he gets tased by Holley, knocking him out. He soon gets arrested along with the lemon families by the British Military, while Mater is able to figure out that the lemons' mastermind is Axlerod, who too gets arrested after he is revealed to be the one who activated the bomb.

In Kinect Rush: A Disney/Pixar Adventure, Professor Z appears on pictures that the player has to hit to get extra points when a new goal is unlocked in the first Cars level.

In the second level, he is heard talking as he tries to stop the player and Holley Shiftwell from deactivating the bomb on Francesco Bernoulli. He makes a physical appearance in the third level. He is in the helicopter with a convoy of trucks full of bombs. Throughout the level, he tries to stop Finn McMissile and the player from finding out where the bombs are being taken. In the ending cutscene, he shoots a missile at the player while in midair, but the player dodges the missile and pushes Professor Z out of the helicopter before the missile hits the helicopter. Finn asks Professor Z if everyone is all right in there, only that he replies saying no thanks due to Finn, who then says, "No thanks required, mate. All in a day's work." When the level is completed with the player seeing their score and what they unlocked, Professor Z is seen with a parking boot, as to prevent him getting away.

"It's Finn McMissile! KILL HIM!"

"Wunderbar! With Finn McMissile gone, who can stop us now?"

"This camera is actually an electromagnetic pulse emitter."

"IT'S THE AMERICAN SPY!"

Z trying to detonate the bomb, to no avail.

Driving on the wrong side of the road

"I'm not the one who activated it? Would anyone else like to try?"

Professor Z getting tasered by Holley 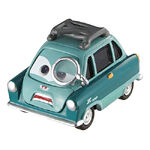 Professor Z's die-cast packaging
Add a photo to this gallery

Retrieved from "https://disney.fandom.com/wiki/Professor_Z%C3%BCndapp?oldid=3945555"
Community content is available under CC-BY-SA unless otherwise noted.