Kari Wahlgren
Carrie Coon (What If...?)

“We... have blood to spare.”
―Proxima Midnight to Black Widow, Captain America, and Black Panther[src]

Proxima Midnight is a Marvel Comics character and supervillain who appeared as one of the antagonists of both Avengers: Infinity War and Avengers: Endgame. She is a high-ranking member of the Black Order who has undying loyalty to Thanos.

Proxima Midnight is fiercely loyal to Thanos. Her harsh, unforgiving training at his hands has rendered her fierce, arrogant, and sadistic. 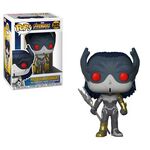