Pluto's Surprise Package
Pueblo Pluto is a Pluto short that was released on January 14, 1949.

Vacationing in the American Southwest, Mickey gives Pluto a buffalo bone to chew on. Ronnie keeps trying to take it from Pluto and hides in a cactus patch with the bone. Pluto is able to enter the patch to retrieve his bone but is unable to escape from the patch seeing as he is too big to squeeze between the cacti. Ronnie rolls a large vase to break open a path through the cactus ring, which allows Pluto to exit, and thus become friends with Ronnie, giving his bone to him. 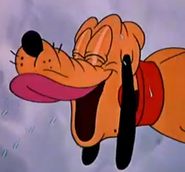 Poster from the release in Australia