The Pumpkin was a plant that becomes the iconic Pumpkin Coach in Cinderella. It has since become a popular symbol in the franchise.

The pumpkin first appeared as an ordinary one growing in the pumpkin patch in Cinderella's garden. When she needed to attend the ball, her Fairy Godmother noticed she lacked a coach, so she enchanted it to come toward them, moving around like a dancer until it finally landed in front of them and turned into a beautiful carriage for Cinderella to get to the ball in. At the stroke of midnight, it turned back into a pumpkin. It transformed back on a path, where it was subsequently crushed into pieces after by trampled by the palace horses.

Another pumpkin was enchanted into a coach by Lady Tremaine, however this one was made dark and twisted, and underwent the transformation in a grotesque manner, and it even violently trapped a wild horse with its vines to force him to pull the carriage, driven by Lucifer who'd been transformed into a wicked coachman. It is eventually destroyed in its coach form when it rolls off the top of the cliff that Lady Tremaine had intended to use to send Cinderella plummeting to her death, while Lucifer also reverts to his true form and gets lost in the woods.

The pumpkin appears at least twice in the series. It first appears on "Rent Day", when Mickey Mouse asked Cinderella if he could borrow it and give it to the Headless Horseman as a head, but she needed it to ride home in. Its second appearance was in "Max's New Car", where Max Goof used the car keys to turn the coach back into a pumpkin. However, it was immediately crushed by Mr. Toad's car. 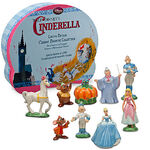 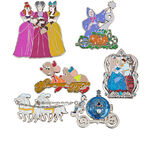 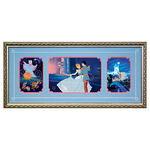 A pumpkin in the third movie

The pumpkin at its area

The pumpkin becoming a coach

The Pumpkin as an emoji from Disney Emoji Blitz

As the "Potential Carriage" in Disney Heroes: Battle Mode