Wolfie trains Oso to find a hidden microchip in just a short amount of time. Oso tries to find the hidden microchip, but he lets the timer reach 0 and gets sucked up a trap tube, out of the building, and into his car. That's when Paw Pilot calls in a special alert. A girl named Nervei wants to carve a pumpkin to enter it in a Halloween Jack-o'-lantern contest, but her dad has never carved one in his old home. So Oso decides to teach Nervei how to carve a Jack-o'-lantern, so that she can bring it to the contest. 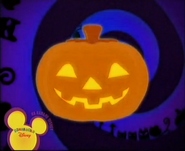 Retrieved from "https://disney.fandom.com/wiki/Pumpkin_Eyes?oldid=4450207"
Community content is available under CC-BY-SA unless otherwise noted.