Quack Pack is a Disney animated television series featuring Donald Duck, his nephews, and Daisy. The show debuted in September 1996 as a part of the Disney Afternoon weekday afternoon programming block. Unlike other Disney Afternoon shows, it was aimed at older audiences such as teenagers.

Quack Pack had one season, consisting of 39 episodes.

Co-Producers Kevin Hopps and Todd Shelton turned to Donald Duck shorts for inspiration for Quack Pack. Shelton noted that in the shorts, Donald mostly interacted with humans, and decided to incorporate humans into the world of Quack Pack. This contrasted with DuckTales, a previous Disney Afternoon series, where the world is inhabited by other anthropomorphic animals. Shelton considers Quack Pack as more of an extension of the original Donald Duck shorts than of DuckTales. Because of this, many characters from the DuckTales cartoons and comics, including Disney characters, such as Scrooge McDuck, Launchpad McQuack or Mickey Mouse, do not make appearances in the series.

The show was created to give each of the nephews their own voices and personalities. Huey was the smooth-talker and schemer, Louie was the athlete and oddball, and Dewey was the intellectual and prankster.

The original title of the show was "Duck Daze", but was changed to "Quack Pack" before release. There are still references to "Duck Daze" in the theme song.

After Quack Pack left the Disney Afternoon block, it eventually resurfaced in reruns on the Disney Channel, and later on Toon Disney. It was removed from the channel's line up along with several other classic Disney shows in November 2004.

The show centers on the adventures of Donald Duck and his nephews, Huey, Dewey, and Louie, who are portrayed as teenagers in this series for the first, last, and only time. The actual age of the boys is not made certain; but in one episode they asked Donald if they could have a car. If they were of the legal age to drive, this would make them at least sixteen years old. Donald works as a cameraman alongside Daisy, who is a reporter. The group travel around the world looking for a big scoop. The three boys are triplets but Huey had once referred to Dewey, and Louie as his baby brothers. Huey must have been the first to be born, therefore making him the eldest of the brothers.

Huey, Dewey, and Louie have distinct personalities more-so than they have been presented with in their earlier lives. They usually resort to extreme and strange measures to avoid getting into trouble with their uncle and to achieve their ambitions. They usually do this by tricking Donald, or whoever else they wish to manipulate. But they usually feel guilty for any of the wrongdoings they had performed which may have upset loved ones, proving that they do possess good morals. Huey, Dewey, and Louie share similar passions such as listening to rock music, getting revenge on those who anger them, impressing girls, getting money, pulling pranks, role models whom they look up to and admire, playing games and reading comics. They also share a profound knowledge of cars and mechanics. But there are certain aspects of their personalities that stand out more in each of them.

They speak in conventional voices, versus the "duck"-like voices they possessed in earlier cartoons such as DuckTales and Disney theatrical shorts, and they each have their own distinct personalities (also in contrast to their earlier portrayals). They also participate in typical teenage activities. Daisy Duck is the girlfriend of Donald and is a reporter for a news program called What in the World, with Donald serving as her cameraman. Ludwig Von Drake also appears in this series, but, even though the series takes place in Duckburg, Scrooge McDuck does not appear. 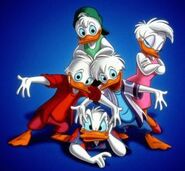