Quackmore Duck is an anthropomorphic duck who is Donald Duck's father and Huey, Dewey, and Louie's maternal grandfather.

Donald claims that his father was a pilot in the 1942 theatrical short Donald Gets Drafted ("I come from a family of aviators! My father, my uncle, my cousin..."). Donald's father was created by Carl Barks, who first mentioned him in the Donald Duck family tree he sketched out for personal use in the 1950s. On this tree, he appeared as Grandma Duck's son and Scrooge McDuck's brother-in-law. Barks named Donald's father Quackmore Duck, and also mentioned his wife, Donald's mother, and Scrooge's sister, whom he named Hortense McDuck.

Donald's parents first appeared in Donald Duck Writes a Book. During Donald's flashback, they could be seen dancing to the music of a gramophone in one panel. Donald tells that his parents were not rich, but nonetheless fun-loving people.

In Mark Worden's illustrated version of Barks' 1950s Duck family tree, Quackmore and Hortense were also given a portrait. On this tree, Quackmore appeared with black hair and a large, curly mustache.

In the comic book series The Life and Times of Scrooge McDuck, Quackmore had a supporting role. In the series' 10th chapter The Invader of Fort Duckburg, he meets Hortense, who has a temper very similar to his own. At the beginning of the following chapter, The Empire-Builder from Calisota, Hortense and Quackmore are engaged, and Quackmore is said to be Scrooge's bookkeeper. Near the end of the story, he and his family leave Duckburg.

Pictures of Quackmore appear in Woo-oo!, the premiere of the Ducktales reboot, and he is mentioned by name by Webby Vanderquack. In "The First Adventure!", he is mentioned to be in the hospital as he was in a fire cracker accident started by Donald and Della, which leds his wife to drop his kids with his brother-in-law, or wife's brother, Scrooge McDuck.

A picture of Quackmore and Hortense is seen in the episode "Dope-a Cabana".

Quackmore and Hortense first met each other when Scrooge crashed in the farm. After an argument, they fell in love.

Hortense leaves Quackmore, now her fiancé, in charge of Scrooge's money while they travel after treasure. 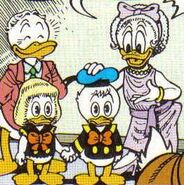 Quackmore and Hortense with their children, Della and Donald. 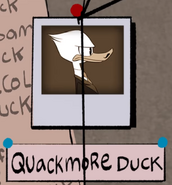 Quackmore in the DuckTales reboot

Quackmore and Hortense's photo in Legend of the Three Caballeros