Disney Wiki
Register
Don't have an account?
Sign In
Advertisement
in: Article of the week, Characters, Females,
and 15 more
English

Lord Milori (lover)
Queen Clarion, (formerly known as Reina or simply Ree) is a main character of the Tinker Bell film series. She is also the beautiful queen of Pixie Hollow, she acts motherly to all fairies and is prepared to do whatever it takes to make sure her treasured fairies live in peace and are well out of harm's way. As well as this, among her many talents, Queen Clarion is also able to travel in the form of golden pixie dust.

Despite her great wisdom, knowledge, and tremendous power, Queen Clarion doesn't seem to take her queenly status too seriously. She is a loving and approachable individual but can be stern when she has to be. It has also been said that she is quite mysterious.

As ruler of Pixie Hollow, Queen Clarion sometimes mediates to relieve stress and help clear her mind. In the films, she also has the task of making sure the preparations for the four seasons are done promptly (with the help of the seasonal ministers). She also greets new arrivals at the Pixie Dust Tree, helps them find their innate magical talent, and gives them a name reflecting their personality or talent.

After Tinker Bell is born in Pixie Hollow, Clarion welcomes her with open arms, fixes her wings, and informs her to find her talent. When Tink is discovered to be a Tinker Fairy, Clarion welcomes her into the clan of Tinker Fairies and gives her the name, "Tinker Bell". Later on, Tinker Bell showcases several machines to Queen Clarion for her trip to the mainland. However, Queen Clarion explains that tinker fairies don't journey to the mainland, as the job is solely for nature-talent fairies. After the news, Tinker Bell decides to change her talent and goes to Vidia, the fast-flying fairy that holds a disliking towards Tinker Bell. She tricks the tinker into trying to round up the elusive sprinting thistles as a way to prove her worth.

Just as Pixie Hollow is preparing to have its nature fairies travel to the mainland to change the season, the sprinting thistles attack and destroy the preparations. Queen Clarion is forced to call off the trip as there's no way for the fairies to travel with all the work destroyed. The tinker fairy redeems herself by using various inventions to restore the preparations. Queen Clarion is delighted to see the tinker come through and forces Vidia to capture all the sprinting thistles as punishment when she accidentally revealed her thistle plot in front of everyone. In the end, when all is well, Queen Clarion allows Tinker Bell to travel to the mainland with her friends to return a music box the former repaired to its rightful owner.

In the sequel, Queen Clarion and the rest of Pixie Hollow are preparing for the Autumn Revelry, which marks the night of the blue harvest moon. When the blue harvest moon shines it light on the legendary moonstone, blue pixie dust is bestowed upon Pixie Hollow and the Pixie Dust Tree. Without the moonstone, the Pixie Dust Tree's power would slowly vanish. Every year, a scepter is created for the moonstone and in the year in question, Fairy Mary recommended Tinker Bell for the job. Tink gladly accepted but the moonstone was accidentally destroyed, prompting the fairy to set out to find the Mirror of Incanta, which allows her to wish the moonstone back to normal. However, Tink ends up using the pieces of shattered moonstone to create billions more blue pixie dust than the original moonstone would have, much to Queen Clarion's delight.

In the television special, Queen Clarion serves as the opener for the legendary Pixie Hollow Games. In the end, she announces the winners, Rosetta and her teammate Chloe, the garden fairy team.

After Tinker Bell broke the border law by bringing a frost-talent fairy from the Winter Woods to the warm regions of Pixie Hollow, the frost fairy's (named Periwinkle) wings began to wither. Since the climate was too warm, Periwinkle started rapidly deteriorating. Queen Clarion arrives just as Tink and her friends take her back to the border that separates the Winter Woods from the rest of Pixie Hollow. Lord Milori, the ruler of the Winter Woods, declares that Tinker Bell and Periwinkle can never see each other again. Even though Tink and Peri are sisters, the warm climate isn't safe for Peri, just as the cold climate of the Winter Woods is dangerous for Tink. Queen Clarion agrees to the terms, and they both explain why the law was created to the two sisters: Many, many seasons ago, when Pixie Hollow was very young, two fairies fell in love. One was a winter fairy, and the other was from the warm seasons. They were enchanted by one another, but as their passion for each other grew stronger, they wished to share each other's worlds. So they disregarded the danger and crossed. One of them broke a wing, for which there is no cure. And so the two lovers had to bid each other farewell for the last time; it was for their own good. From that day forth, Queen Clarion decreed that no fairy was to ever cross the border again, and Lord Milori agreed to her terms.

In the aftermath of Periwinkle crossing the border, the warm regions of Pixie Hollow began to freeze as a machine that creates snow went out of control. The balance of the seasons is throw off and a huge freeze starts to rapidly approach the Pixie Dust Tree, which puts it in grave danger. For if the tree is destroyed, no fairy will ever fly again Suddenly Tinkerbell gets the idea to have the frost fairies use their ice to preserve the Pixie Dust Tree, so she again disobeys the rules and crosses the border to find her sister. As Tink flew, her wings began to freeze and they eventually snapped, but she did not tell anyone as they had an important task to complete. Periwinkle and her friends Spike and Gliss go with Tink to the tree and the frost fairies are granted to encase the tree in frost by the Queen. As the tree is so big, and the freeze is moving fast, Peri declares that they won't have enough time and apologizes to both the Queen and Tinkerbell. Then out of the clouds emerges a man riding an owl, a man that Clarion would recognize instantly - Lord Milori. Followed by the winter fairies, they frost as many trees as they can before the freeze hits them, they then all return to the tree. Once all of her faired are safely hidden and warm, Queen Clarion stays behind and asks Milori if everything will be alright. Truthfully, he tells her that he has no idea, as he has never witnessed an abnormality like this before. Clarion sighs lightly and shivers as it begins to get colder, Milori then gives her his cloak made of snowy owl feathers and tells her to take shelter before the freeze reaches the tree. She agrees and begins to walk away, she stops briefly and looks at Milori's retreating figure to see that Milori has a broken wing, revealing that they were, in fact, the two lovers. Later, a ray of sunlight can be seen beginning to melt the ice from the freeze. All the fairies walk toward the Center of the Pixie Dust Tree, desperately hoping that the Pixie Dust survived. The fairies all smiled and cheered as a flood of Pixie Dust erupted from the tree trunk. As the tree had now been saved, Tinkerbell revealed her broken wing to the rest of the fairies. Clarion stepped forward, telling Tink that this was caused by her and Milori's rule, Milori then placed a reassuring hand on Clarion's shoulder. Tink and Peri found a way to fix Tink's wing, and then they all the fairies looked over at Queen Clarion and Lord Milori. Milori held one of Clarion's dainty hands in his own whilst his other hand rested at the bottom of her back, The border crossing rule was then discarded and the warm fairies were welcomed into the winter season, their wings being covered in frost so that they wouldn't suffice to damage.

Unfortunately, she falls in a deep sleep from the poppies' soporific pollen placed by the rogue Zarina. She and every fairy wake up after Zarina and the others get back to Pixie Hollow returning the Blue Pixie Dust to its rightful place. During the show, Zarina switches back their talents to the original, and everyone is awed and applauds. The last scene shows everyone going up to congratulate Zarina on her incredible magical talents of fairy dust alchemy.

Queen Clarion is concerned about what dangers the mythical NeverBeast poses to all of Pixie Hollow and asks the scout fairy Nyx and a reluctant Fawn to find out more about the creature before capturing it.

Queen Clarion with the Seasonal Ministers. 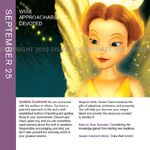 Queen Clarion in the credits