1988-present
Dana Elaine Owens, better known by her stage name Queen Latifah, is an American singer, songwriter, rapper, actress, model, television producer, record producer, comedian, and talk show hostess. She is best known for her role as Khadijah James on the Fox sitcom Living Single from 1993 to 1998. She is also well-known for voicing Ellie the mammoth in the Ice Age franchise.

For Disney, she played Aunt Em in The Muppets' Wizard of Oz, and "Cha-Cha" in The Country Bears. She also posed as Ursula in "Where Memories Take Hold and Never Let Go" in the Disney Dream Portrait Series and appeared in the Bill Nye the Science Guy episode about insects. In addition, she was mentioned in an episode of K.C. Undercover. She played Ursula in the TV special, The Wonderful World of Disney: The Little Mermaid Live!. 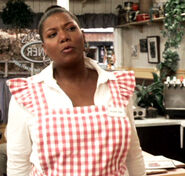 Ursula
(The Wonderful World of Disney: The Little Mermaid Live!)
Add a photo to this gallery

Queen Latifah speaks at the Let's Stay Together panel at the 2011 Winter TCA Tour. 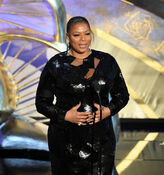 Queen Latifah speaks at the The Clark Sisters: First Ladies of Gospel panel at the 2020 Winter TCA Tour.
Add a photo to this gallery
Retrieved from "https://disney.fandom.com/wiki/Queen_Latifah?oldid=4571098"
Community content is available under CC-BY-SA unless otherwise noted.