The Queen of Atlantis

Mother (by a young Kida)

To escape with her family (failed)

Her husband, her daughter, her kingdom is in peace

Her Kingdom and her family in danger

Send into the Crystal and being used to form a protective barrier around the city, but the city sinks into the sea and was lost to the crystal forever.

”Kida! Just leave it! There is no time!”

The Queen of Atlantis (referred to only as "Mother" by a young Kida) is the wife of king Kashekim Nedakh and the mother of princess Kidagakash "Kida" Nedakh.

When the film begins an explosion triggers a massive tidal that threatens Atlantis; all of the city is evacuated, and the royal family is being lead to a refuge. During the time Kida loses her doll, the Queen stops and tells her to leave it behind as there is no time. Soon she was caught in the light and bonded with the crystal, And she was carried toward the Heart of Atlantis as her daughter look on, crying. While she was carried toward the crystal she unknowingly takes her daughter's bracelet with her, and the city soon vanishes beneath the sea.

Many thousands of years later, Atlantis has fallen into ruin and the King has become more bitter and depressed since the loss of his wife. Kida says that she remembers the day she lost her mother and that she misses her very much.

When Milo Thatch and his friends arrive in Atlantis, Kida takes interest in Milo because she thinks that he can explain her some underwater murals that the natives have forgotten about. Milo explains to Kida that what she saw as a girl that took her mother away was the Heart of Atlantis that gives life to the city through the Atlanteans' crystals. During the film's climax Rourke mortally wounds the King to tell him of the location of the Heart of Atlantis, Milo tends to the King's wounds and he explains Milo that the Heart has developed consciousness and when it senses that Atlantis is in danger it will choose a member of the royal family to merge with and create an energy force field to protect the city, this is what happened to the Queen many years ago. Rourke and Helga find the Heart in a secret chamber underneath the throne room taking Milo and Kida hostage, the crystal senses danger and merges with Kida (just as the Queen did many years ago). It is likely that Kida could finally reunite with her mother because when she descended from the Crystal, Kida was holding the bracelet that her mother took years ago when the city sank. 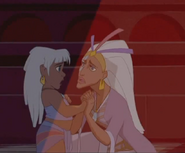 Add a photo to this gallery
Retrieved from "https://disney.fandom.com/wiki/Queen_of_Atlantis?oldid=2139737"
Community content is available under CC-BY-SA unless otherwise noted.
FandomShop DC Trivia GalaxyQuest