His trumpet, drum, flute, and various other instruments

Quincy is the tritagonist of Little Einsteins. He is the talented musician of the group.

Quincy is a kind, sweet, fun, loyal, and trustworthy little boy. He is also very talented in playing all types of musical instruments. He is around five years of age.

His friends are Leo, June, Annie, and Rocket. He also has other friends, but they are not human, like a car named Carmine and an ivory-billed woodpecker named Tapper.

Little Einsteins is the only franchise he has ever been shown. He appeared in every episode.

He made an appearance at Disney World as a puppet in Disney Junior Live on Stage! in Disney's Hollywood Studios Theme Park and Animation Courtyard. Also, he meets and greets people, along with the other Little Einsteins.

Quincy holds Leo's baton for completing his own mission 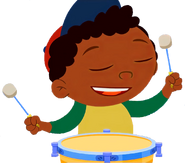 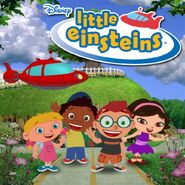 Retrieved from "https://disney.fandom.com/wiki/Quincy?oldid=4477668"
Community content is available under CC-BY-SA unless otherwise noted.