Mickey Mouse
The Jedi Order
R2-MK is a red, white, and yellow astromech droid with black outlines that is owned by Jedi Knight Mickey Mouse.

R2-MK was an astromech droid owned by Jedi master Mickey Mouse. The droid's dome head is decorated with stylized Mickey Mouse ears with the droid's name on its back. R2-MK served as a partner for Mickey as a Jedi knight, co-piloted his Eta-2 Actis-class interceptor, and aided him in promoting the Tomorrowland starport hub of Star Tours.

R2-MK was created in 2010 to tie in with Star Wars related events at the Disney Parks. His design was inspired by Mickey Mouse and he was named after R2-D2 and Mickey (MK). The droid was predominately made for merchandise but did make appearances outside of that.

"The creative 'Forces' at Disney and Lucasfilm are proud to announce an all-new character coming to the Disney Parks in April 2010. Every Jedi needs his own astromech droid, and Jedi Mickey is no exception. This spring we will be introducing Jedi Mickey's own droid, R2-MK."
―Disney press release introducing R2-MK, January 2010

R2-MK appeared in Star Wars parades, along with Mickey and his friends. He is also a meetable character during Star Wars Weekends event at Disney's Hollywood Studios.

R2-MK makes a cameo appearance in the queue for Star Tours: The Adventures Continue. His silhouette can be seen passing by a window in one of the boarding areas of the star-port, being identified by his astromech figure and Mickey Mouse ears. 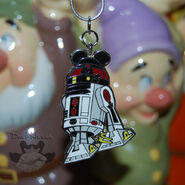