R5-D2 is a droid character that G2-9T can be seen working on in all the versions of Star Tours.

R5-D2 is not seen in any Star Wars movies, and is usually confused with R5-D4, the red and blue R5 unit who has a motivator blow out prior to being totally sold to the Lars family in Star Wars Episode IV: A New Hope. R5-D2 does have some differences compared to R5-D4. First and foremost, the droid is all red. Secondly, R5-D2 has a modified two eye "goggle" eyepiece compared to the standard R5 unit three eye "stud" pieces (though the two eye version is seen in the movies). 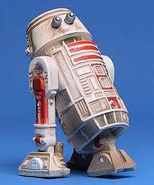