His batteries running out

Either given away, put in the attic, or sold in yard sales
RC (Remote Control) Car, or simply RC for short, is Andy's remote control toy race car that appears in the 1995 Disney/Pixar animated film, Toy Story and its 1999 sequel.

In the beginning of Toy Story, RC is used by Andy for taking Woody for a spin. When Woody tells the other toys that it's safe to come out once Andy left his room, RC was the first after Woody to come to life as he peaks out from the closet. Later, when Buzz Lightyear comes along, a jealous Woody tried to hide Buzz from Andy to ensure Andy would bring him to Pizza Planet and not Buzz. Inspired by the Magic 8-Ball that he accidentally hid behind the desk, Woody does the same to Buzz by bumping him with RC. Seeing RC though, Buzz dodges him, bringing about a chain reaction that gets him knocked out of the window. RC, having witnessed to these events, later informs Mr. Potato Head that Woody did this, and most of the toys begin to ambush Woody (RC prevents him from backing up), though once Andy comes back, they are forced to retreat.

Later on, when Andy's family is moving, Woody and a reformed Buzz try to catch up to the moving truck while escaping Sid's dog Scud. Buzz initially makes it on, but he gets left behind after he helps Woody escape the dog. Looking for Andy's fastest toy in the boxes of toys in the moving truck, Woody quickly finds RC and drops him off the truck to retrieve Buzz. Woody drives RC to Buzz, who was hiding under a car from Scud, and drives him back. When the toys return, the onlooking toys, especially Mr. Potato Head, mistook Woody taking RC as him trying to dispose another toy, and Woody is met with a mob rallied by Mr. Potato Head and gets thrown off the truck, not believing he was saving Buzz after Woody tells the other toys that they need to save Buzz. Woody is quickly picked up by RC, and Woody and Buzz begin to catch up to the truck, putting RC on Turbo to get closer. The other toys catch sight of Woody riding on RC with Buzz and learn Woody was telling the truth as they become guilty and horrified for not listening to Woody. They proceed to help the trio back on the truck via Slinky to pull them aboard. But once Woody is in reach of Slinky, RC's batteries begin to deplete and slows down to a stop, causing Slinky to outstretch and rebound back into the truck. However, Buzz remembers Sid's toy rocket can get them to the truck; once Woody lights the rocket, Buzz holds onto Woody, who holds onto RC, keeping them down to Earth thanks to RC's aerodynamics, as they fly through traffic. Once they approach the truck, Woody manages to throw RC back inside and into Potato Head as he and Buzz take off into the air, finally catching up with Andy inside his family's minivan.

Although Buzz had dropped RC's remote on the road once his batteries were depleted, Andy seemed to have found it or bought a new one, as he was seen once again controlling RC with it. RC was not seen again during the course of the movie, except briefly during the ending when the toys gathered around Wheezy, who sang You've Got a Friend in Me.

In Toy Story 3, RC appears briefly in the home videos Mrs. Davis made using recordings of Andy playing with his toys. Later on, Woody comments that RC and toys like him might have been either given away, put in the attic, or sold in yard sales.

RC appears in a small flashback at the beginning of the film where Andy and Molly's toys (Bo Peep, Woody, Buzz, Jessie, Slinky, etc) help him out of a gutter during a rainstorm.

An oversized RC serves as the ride vehicle for the RC Racer attraction featured at many incarnations of Toy Story Land, a surfboard-style coaster that places him on an oversized Hot Wheels ramp.

Photo-op versions of RC at more of a guest-friendly scale can also be found in some of these Toy Story Lands as well as at Disney's All-Star Movies Resort at Walt Disney World and formerly at the Buzz Lightyear's Pizza Planet restaurant at Disneyland Paris.

A life-sized RC can be seen in the fictional cars section in the former Studio Tram Tour: Behind the Magic attraction, which was placed at same date/year unknown in the aforementioned attraction. 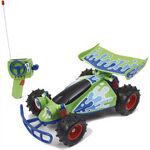 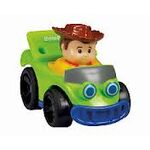 RC and Buzz being chased by Scud 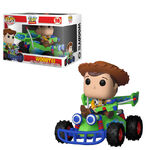 Simplified LEGO version of RC from 2019

RC in a flashback in Toy Story 4 where he is trapped in a gutter during a rainstorm.

Retrieved from "https://disney.fandom.com/wiki/RC?oldid=4159826"
Community content is available under CC-BY-SA unless otherwise noted.