2
Rachael Ann MacFarlane is an American actress, voice actress, comedian, and singer. She is best known as the voice of character Hayley Smith on the animated television show American Dad!, which was created by her older brother, Seth, as well as Eris and Mindy on Cartoon Network's The Grim Adventures of Billy and Mandy.

For Disney, MacFarlane voiced Cordelia in the Sofia the First episodes: "Gone with the Wand" and "Through the Looking Back Glass" and Azurine in "The Mystic Isles". She also voiced Enid Quintara and Luella Spear in Fillmore! and Lin Gaava in Star Wars Resistance. She also voices Odalia Blight in The Owl House.

Cordelia the Conjuror
(Sofia the First)

Rachael MacFarlane attending the Heavan on Earth Gala in September 2016. 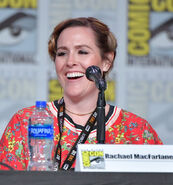