Henry
Rachel Hannah Weisz is an English-American film and theatre actress and former fashion model who was best known for playing as Evelyn 'Evy' O'Connell née Carnahan in the first two installments of The Mummy trilogy but was later replaced by Maria Bello in The Mummy: Tomb of the Dragon Emperor.

For Disney, she played Evanora in the 2013 Disney fantasy film Oz the Great and Powerful. She also posed as Snow White in "Where You Are the Fairest of them All" in the Disney Dream Portrait Series. She even played Hannah Roennfeldt in the 2016 Touchstone Pictures film, The Light Between Oceans.

She will play Melina Vostokoff in Black Widow. 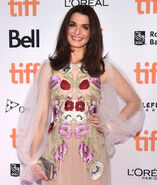 Rachel Weisz attending the 25th annual Screen Actors Guild Awards in January 2019.
Add a photo to this gallery
Retrieved from "https://disney.fandom.com/wiki/Rachel_Weisz?oldid=3852874"
Community content is available under CC-BY-SA unless otherwise noted.