Raging Spirits is an attraction at Tokyo DisneySea in the Lost River Delta area.

A group of explorers were wandering around the jungle when one day they stumbled upon a 5,000 year old site, one with idols, a large temple and two altars, one of fire, one of water. After excavation, the explorers decided to make the fire and water statues face each. This defilement of the temple has angered the two gods and restarted an ancient battle between fire and water.

The track layout of the attraction is based on the layout of the first looping roller coaster built by the Pinfari Company. Pinfari called this a TL-59, the TL stands for "The Loop" and the 59 is for the ride's 59m width. This Intamin version copies the course, but uses a track style that is unique to Intamin. The same track layout was originally used for Disneyland Paris' Indiana Jones et le Temple du Péril. 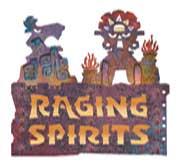