Disney Wiki
Register
Don't have an account?
Sign In
Advertisement
in: Television episodes, Star vs. the Forces of Evil episodes

Star vs. the Forces of Evil
"Raid the Cave"

On February 8, 2017 the episode premiered alongside "Trickstar".

Star tries to rescue Glossaryck and the Book of Spells from Ludo.

Still reeling from the night before, Star packs up numerous weapons and personal belongings to take with her to get the book and Glossaryck back from Ludo. Marco tries to get her to calm down and suggests calling Moon for help, but she refuses as she feels that she needs to fix the mess she caused and does not want to upset her mother with losing her personal belongings. They show up at Buff Frog's house where he reveals that he had been sending letters to the two about Ludo's schemes, but they have been unable to decipher his writings (Buff Frog is illiterate). He informs them about where he had initially found Ludo's lair and tells Star that she will only need her wand.

Star and Marco arrive at the corn shucking lair and attack the monsters waiting inside. To their surprise, they are just squatters who consider themselves "alternative monsters" and just want to hang out. As they consider their next step, Star decides to use the all seeing eye spell and manages to locate Glossaryck who seems at ease with his predicament. Star uses her magic to reach through the eye, which Glossaryck says he has never seen before, but he refuses on the grounds that Ludo owns the book now. When she declares that she needs him, he tells her "maybe this is what you need" and the spell closes.

The monsters show their appreciation for Star for being the "rebel princess" which boosts confidence back in her. Taking Marco's advice, they head back home and tell Moon and River about what happened who, to their surprise, take the news well and inform her to just sit tight and that they will handle it. As Marco heads to bed, Star decides to start over and begins testing her spells whilst also writing in a notebook using the pen feature of her wand. 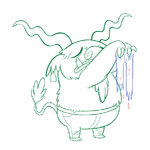 "Rebel princess does things her own way."

Star starts writing her own notebook of spells