Disney Wiki
Register
Don't have an account?
Sign In
Advertisement
in: Characters, Pixar characters, Inside Out characters,
and 9 more
English

“I loved you in Fairy Dream Adventure, Part 7. Okay, bye. I love you.”
―Joy talking to Rainbow Unicorn

Rainbow Unicorn is a minor character in the 2015 Disney/Pixar animated feature film, Inside Out.

Rainbow Unicorn is an actress and works at Dream Productions. She has starred in a dream sequence titled Fairy Dream Adventure, Part 7. Joy loves Rainbow Unicorn in this production.

Rainbow Unicorn is first seen when Joy, Sadness, and Bing Bong sneak into Dream Productions so they could get an opportunity to see her in person; however, Joy is too captivated by the unicorn to even properly introduce herself. Later on, when Joy and Sadness attempt to wake up a sleeping Riley by infiltrating one of her dreams, Rainbow Unicorn accidentally appears on camera as she tries to sneak off with a plateful of cupcakes and other snacks. Some time later, she is seen onstage performing a dance number; however, the audience doesn't seem to be impressed at all. Her performance is then violently interrupted when Jangles bursts into the soundstage and causes mayhem. 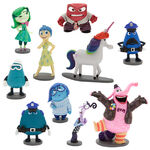 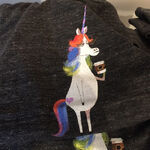 Rainbow Unicorn gets caught in the act.

Jangles intrudes on the set.

Rainbow Unicorn glances up in terror.

As the "Proud Unicorn" Badge in Disney Heroes: Battle Mode