2006-present
Raini Alena Rodriguez is an American actress and singer who is the older sister of Rico Rodriguez. She is best known for her role as Maya Blart in the 2009 action comedy film, Paul Blart: Mall Cop and its 2015 sequel.

For Disney, she played Trish De la Rosa on the Disney Channel original series, Austin & Ally. She also played Betsy in an episode of The Suite Life of Zack & Cody, Arlene Roca on the Disney XD sitcom, I'm in the Band, and Tess in the 2011 Disney teen film, Prom. She even voiced Isabel Montoya in the "Lost and Found" episode of the Disney Junior animated series, Handy Manny and Creepy Caroline in Vampirina and Starehe in The Lion Guard. She will play Barb in Bunk'd. 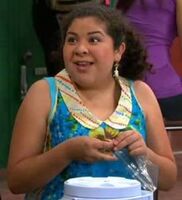 Arlene Roca
(I'm in the Band)

Starehe
(The Lion Guard)
Add a photo to this gallery

Raini Rodriguez and her brother, Rico at the 2016 Nickelodeon's Kid's Choice Awards.

Raini Rodriguez attending the 69th annual Emmy Awards in September 2017.
Add a photo to this gallery
Retrieved from "https://disney.fandom.com/wiki/Raini_Rodriguez?oldid=4124555"
Community content is available under CC-BY-SA unless otherwise noted.