This article is about the character that uses the alias of Pietro Maximoff. For the real Pietro, see Quicksilver.

“Don't believe anything that man said. He is not your uncle.”
―Wanda Maximoff to her sons[src]

Ralph Bohner is a supporting character in the Marvel Cinematic Universe, featured in the Disney+ series, WandaVision. He lived in Westview next to what would have been the home of Wanda Maximoff and Vision. He was placed under the thrall of Agatha Harkness, who initially claimed him to be her husband, before having him pose as Wanda's deceased brother, Pietro Maximoff. He was first mentioned in the first episode, and made his debut in the fifth episode. He is portrayed by Evan Peters.

In the fifth episode of the series, "Pietro" arrives with an American accent much like Wanda's. The fact that the role was recast is referenced in the episode. He rings her door, and asks if he can give her a hug. Wanda looks at him in shock, before embracing him, and when he sees Vision, she refers to him as a "popsicle" and questions who he is.

In the sixth episode, it is revealed that this "Pietro" has the memories of the original (including his death) and is fully aware of how he looks different. "Pietro" tells Wanda that he only remembers being shot on the street and later hearing her calling him, which caused him to come to Westview as he knew his sister needed him. He is also aware of how the world of Westview is deliberately made to resemble a sitcom, with him playing the role of the man-child uncle that gives Wanda grief, as well as how Wanda appears to be in control of everything. Wanda questions what happened to his accent, to which "Pietro" points out that Wanda does not have her normal accent either. While he is talking to Wanda, she briefly has a vision of his corpse with bullet wounds, reminding her of his death. When Billy senses that Vision is dying outside of Westview, "Pietro" comments that it's not as though Vision can die twice. This angers Wanda, who uses her magic to throw him across the town square.

In the seventh episode, Billy and Tommy ask Wanda what "Pietro" meant when he said about re-killing Vision, but Wanda tells them not to believe in anything that "Pietro" said because he is not their real uncle. As the twins are confused by this and ask who "Pietro" is, Wanda replies that she does not have all the answers. While talking with Darcy Lewis, Vision also asks who is the imposter "Pietro", and Darcy replies she does not know. At the end of the episode, Wanda's next door neighbor Agnes is revealed to be a witch named Agatha Harkness and she is the one responsible for bringing this version of "Pietro" to Westview. During a post-credit scene, "Pietro" re-appears and catches Monica Rambeau while she is trying to enter the basement of Vision and Wanda's house to go after Wanda.

In the eighth episode, Agatha reveals that the "fake Pietro", or "Fietro" as she puts it, is an actual person who was the result of a "crystalline possession" who acted as her eyes and ears. She explains that she would not be able to manipulate the real Pietro with necromancy and bring him to Westview, because he is on another continent and "full of holes" and her magic has limits.

In the final episode, "Pietro" is revealed to be an actor living in Westview named Ralph Bohner, the continuously mentioned husband of Agnes, who is actually the real owner of the house Agnes was living during the sitcom and is being mind-controlled by her to act as her lackey. Monica manages to flip him and removes his necklace, which had been controlling him this entire time, and he reverts to normal, begging her to be spared. 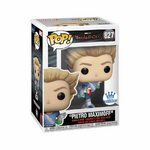