Ralph Garman is an American actor, voice actor, comedian, and TV and radio host. He is perhaps best known as the host of The Joe Schmo Show and for voicing various characters on Fox's Family Guy.

For Disney, he played a radio announcer in the Marvel TV series Agent Carter episode "Bridge and Tunnel" and voiced Mojo on the Avengers Assemble episode "Mojo World". He also voiced Torpe in the Elena of Avalor episode "The Tides of Change". 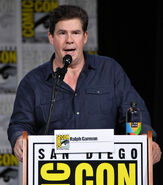 Ralph Garman speaks at the 2018 San Diego Comic Con.
Add a photo to this gallery
Retrieved from "https://disney.fandom.com/wiki/Ralph_Garman?oldid=4053674"
Community content is available under CC-BY-SA unless otherwise noted.