Derezzed
Ram is a supporting blue program character in the 1982 film, Tron. He resembles his user, Roy Kleinberg.

Ram was a program first seen in a pit cell inside the Game Grid, where programs resistant to the MCP's rules were forced to participate in gladiatorial games, in which the losers are destroyed. He was a close friend of Tron and Crom. Before being appropriated by the MCP, Ram had been an actuarial program for an unnamed insurance company; he had really enjoyed helping people plan for their future needs. Together with Flynn and Tron, he escaped from the Game Grid during a Light Cycle match. While fleeing Sark's forces, Ram's light cycle was destroyed by tanks. He was critically wounded and, after discovering that Flynn was a User and getting his promise to go on and help Tron, he eventually derezzed.

Flynn meets Ram in his cell. 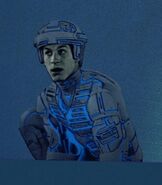 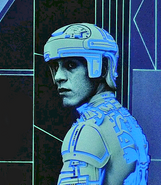 Ram and Flynn at an energy pool.