Disney Wiki
Register
Don't have an account?
Sign In
Advertisement
in: Characters, The Emperor's New Groove characters, Males,
and 9 more

Kuzco, clowns
Ramon is an athletic student at Kuzco Academy who seems to be of Hispanic descent. He is shown to have amazing sporting ability, and is thus very popular with the girls at the school. Malina has a crush on him, which causes Kuzco to greatly dislike him. He is also afraid of clowns.

Ramon is very complimentary and appreciative. He always gives compliments (mostly toward girls) e.g. he said Yzma is the most beautiful woman. Ramon dislikes Kuzco; he even tried to kill him by pushing him in a scorpion arena. According to Yzma's sources, he is a treacherous double-crosser. Ramon has a crush on Malina. 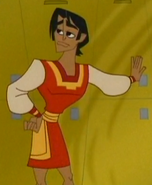 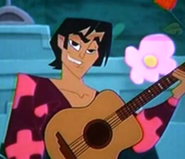