Still standing
Ramone's House of Body Art is a custom body and paint shop, located in Radiator Springs. It is owned and operated by Ramone. Ramone is an artist - a true magician with paint and metal. There was a time when his only canvas was himself; he repainted himself daily. Later, when Lightning McQueen helped put Radiator Springs back on the map, Ramone has had his share of customers - including the star race car himself. Before heading off to the World Grand Prix, Lightning stops by Ramone's for a new paint job, and Ramone gives him a whole new look, even adding a spoiler to him.

Conoco Tower and U-Drop Inn in Shamrock, TX were used as the inspiration for Ramone's House of Body Art.

The building appears at Cars Land in Disney California Adventure serving as one of the main gift shops. During the Halloween season, Ramone sets up an ofrenda for Doc Hudson for Dia de los Muertos. Chip Foose designed the interior of the House of Body Art.[1]

Additionally, it appears in Radiator Springs Racers as one of two potential stops for your car to prepare for the race, with Ramone providing a quick paint touch-up. 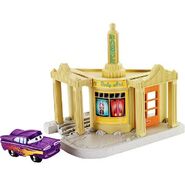