Fix-It Felix Sr. (adoptive grandfather)
Rancis Fluggerbutter is a minor character in Disney's 2012 animated feature film, Wreck-It Ralph and its 2018 sequel. He is one of the racers from Sugar Rush, with his candy theme associated with Reese's Peanut Butter Cups. Along with Candlehead, he is one of Taffyta Muttonfudge’s cronies.

Rancis is a racer from the game Sugar Rush; initially he was among the racers who had bullied Vanellope for her status as a glitch. He is part of a large group of children, but seemed to usually be with Taffyta Muttonfudge and Candlehead.

This blazer-wearing boy wonder likes looking in the mirror almost as much as he likes racing. Rancis Fluggerbutter may look like a party on the outside, but he's all business on the inside. He has bright eyes and even brighter ideas, which are reflected in his smooth racing techniques.

Rancis always seems to be very dedicated in his endeavors, whether it be bullying Vanellope or racing for the Sugar Rush Cup. Often, Rancis is seen looking at himself in the rearview mirror or primping; when interacting with others, he is usually shown smirking or gloating, suggesting he is somewhat egotistical and considers others as a source of amusement. In One Sweet Race, Rancis' softer side comes to light when he falls victim to Taffyta's teasing. Determined to win a trophy, Rancis ends up selling all his possessions to buy a superior kart.

His character is more fleshed out in One Sweet Race as he is shown to have never won a Sugar Rush Cup and had worked hard to win one, even going so far as to go to sell all of his belongings to go to the bakery and buy the best kart there was, only to crash it due to his inexperience. He is shown in a more sympathetic light as a person who works hard to achieve his goals, can be sensitive as he was hurt by Taffyta's remarks about him never being able to win a Sugar Rush cup, and a hard worker as he did not give up in trying to win.

Rancis is first seen racing and then giving a gold coin to King Candy but is disturbed by Vanellope's arrival. King Candy tries to arrest her, but Wreck-It Ralph distracts the guards. Rancis is called by Taffyta and he, along with a large group of other racers, follow Vanellope to a junkyard where they see her racing kart. After failing to convince her not to race, Rancis starts kicking her kart, and the other racers start vandalizing the kart while Taffyta yells at Vanellope and tosses her into a mud puddle. Ralph comes out and charges at them and Rancis and the other racers jump into their karts and drive away.

Rancis is next seen at the Random Roster Race, and Vanellope also comes with a new kart. The other racers are unable to get past the obstacles in the race, but Vanellope easily gets close to Rancis, Taffyta, and Candlehead. Upon seeing her, Rancis and Taffyta order Candlehead to light the cherry bombs that explode near Vanellope. Thinking she has been defeated, Rancis, Candlehead, and Taffyta drive into a cannon, but then Vanellope suddenly glitches in front of them. This spooks the three into spinning out, causing them to miss the higher part of the course when shot out of the cannon and fall into a cupcake frosting. Soon after, Rancis flees when Sugar Rush is attacked by Cy-Bugs, and King Candy fuses with one of them. After King Candy and the Cy-Bugs are defeated, Vanellope crosses the finish line and Rancis regains his memory that she is a princess. He apologizes for his treatment, stating they were jokes only to hear Vanellope say she will execute him, to which he breaks down crying with the other racers about their impending death. He calms down after Vanellope reveals that she was joking. Rancis can also be seen with all the other characters at Felix and Calhoun's wedding.

Rancis appears in the sequel and participates in the big event when the game Sugar Rush gets unplugged due to the steering wheel being repelled. He is later taken to Felix, the Nicelanders, and Calhoun's care at the game Fix-It Felix, Jr.

At the end of the film when the steering wheel for Sugar Rush was finally delivered to Litwak's Arcade to replace the broken part, Rancis can also be seen reuniting with his beloved game as Felix and Calhoun watch the race. He is then seen with other arcade characters attending parties held by other characters.

The tie-in storybook One Sweet Race, set after the film, expands on Rancis' character a bit, revealing that he has always dreamed of winning a Sugar Rush Cup race, but he has never been able to do so, and the other racers, especially Taffyta, make fun of him for it. He tries paying for the best kart the bakery can produce, but he ends up crashing that kart. Afterward, Vanellope helps him build a new, sturdier kart, which he names RV1 after both of them. Rancis enters the race with the RV1 and wins.

Rancis and Vanellope on the cover of One Sweet Race. 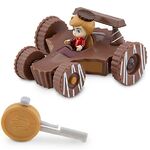 A Rancis figure, complete with his kart. 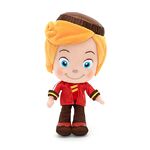 Early concepts of Rancis show him with red or orange hair.

Rancis with a gold coin.

Rancis and the racers upon seeing Ralph.

The trio fall into a Red Velvet cupcake.

Rancis and the others beg for Vanellope's mercy.