Queen Rani (by Tree of Life residents)
Princess (by Janna)

Leader of the Night Pride
Queen of the Tree of Life

Defending the Tree of Life, Kion, selflessness, the Roar of the Elders, her brother Baliyo, her family

Kion not telling her that Makucha's Army followed them, gluttonous predators, Kion using the Roar of the Elders on her little brother, her family in danger, her grandmother dying, letting her emotions get the better of her

Rani is a teenage lioness that was introduced in Season 3 of The Lion Guard, starting in the episode "The Tree of Life". Rani serves as the main deuteragonist of the series. She is the leader of the Night Pride and eventually ascends the throne becoming Queen of the Tree of Life with Kion as both her King and mate.

Rani is a strong-willed and kind-hearted lioness who takes her duty as a leader seriously, prioritizing the safety of the animals in the Tree of Life. However, she can be quite short-tempered and moody, assuming things before thinking it through and sometimes let her emotions got the better of her, a lesson which she later learned.

Beneath Rani's strong attitude, she actually hides her insecurity at the prospect of becoming the next queen, feeling that she's not ready or good enough yet to rule. With Kion and Makini's help, Rani eventually able to overcome her inner doubts and embraces her role as queen. After becoming the queen, Rani grows calmer and wiser in taking action and decisions, earning her deeper respect from her subjects.

Rani is a slender young lioness who has chestnut fur with a dark brown stripe running down her back. The top of her ears are lined with a similar brown, and her pink inner ears have dark brown fur underneath. She has a red nose and her eyes are chocolate brown, and just above them is tawny, with the lower half becoming lighter.

This brown-cream color is also present on her muzzle, her underbelly, and her paws. The back of her legs contains dark markings, similar to Kion's. The tip of her tail is dark brown. She also has a scar on her lower right foreleg from unknown circumstances.

The River of Patience

While Kion and Ono are recovering, the Tree of Life is ambushed by Makucha, Chuluun, and Ora. Rani and her pride easily chase them away because of the three intruders are unable to work together properly. Upon hearing that Makucha and the others have followed the Lion Guard, Rani blames them for leading the villains to the Tree of Life. Kion tries to make it up by helping the Night Pride dealing with Makucha's group, but Rani insists that her pride can deal with them alone.

Makucha, Chuluun, and Ora try to get to the Tree of Life again through another path. She and her pride are surrounded when Ora manages to bite her brother, Baliyo, with his poison, leaving him paralyzed and defenseless, but Kion joins the fight. While Ora runs away after Kion joins, Makucha and Chuluun goes through the hill, but are intercepted by Kion and Rani respectively. From this fight, Rani starts to see Kion and his friends in a new light.

Rani and her pride received a report that Makucha and his group is attacking an animal again. Rani arrives with her pride to save the supposedly injured Mama Binturong, (disguising her name as Granny Ginterbong) who is actually working together with Makucha and the others. Rani welcomes Mama Binturong into the Tree of Life while inadvertently giving her information that Mama Binturong takes advantage of together with Makucha, Chuluun, and Ora. Fortunately, Ono, who has regained his eye-sight, was able to figure out their plan, allowing the Night Pride and the Lion Guard to stop the attack.

After being rudely called a destructive animal by the tundra animals, Rani and Baliyo are concerned why would Beshte attack Ullu, the owl who constantly warns the Night Pride about danger to which Rani and Baliyo decide to handle the situation about "Poa the Destroyer". Upon realizing that "Poa" is actually Beshte's catchphrase and not a name, Rani decides to talk to Kion about this incident with the tundra animals while telling Baliyo to find the Guard.

When Rani and Baliyo are talking to the tundra animals at the Tree of Life about the situation about Beshte, Pinguino then forgives Beshte for being rude to him as Rani notices the tundra animals being respectful to Beshte by praising him for saving him.

Rani, her pride, and Kion are called by the dying Janna who entrusts the role as queen of Tree of Life to Rani. As Janna passes away, Rani and the animals present mourn for her. Rani confides to Kion that she worries she can't become a good queen. Kion tells her his own experience when he was first appointed to become the leader and assures her she'll able to pull it through as he did. When Kion reveals that he has no courage to speak with Mufasa until his scar healed, Rani encourages him to talk with Mufasa as he may help him feel better. To lift up Rani's spirit, Makini shows her paintings of the Tree of Life's past so that Rani can have and see the wisdom that Janna left behind at any time. In the afternoon, Rani is officially crowned as the new queen of Tree of Life, gaining her confidence in ruling her home.

The Lake of Reflection

Now appointed as Queen, Rani is given much more responsibility in defending the Tree of Life. She and the rest of the Night Pride battle Makucha's army who once again attempt to invate the Tree of Life. The Lion Guard intervene in the fight and unintentionally cause problems for the pride, but fortunately succeeds in driving the villains off. Rani insists that she should take the lead, and despite Fuli and Bunga's protests, Kion agrees, feeling as if he can't lead the Lion Guard with the venom making him lose control of the Roar. Later, he makes a proposal to Rani; The Lion Guard can protect the Tree of Life in the daytime, whilst the Night Pride could go back to patrolling at night. As the Night Pride head off to rest, Fuli expresses her concern over Kion's lack of confidence, and Rani secretly shares this opinion.

Rani approaches Kion at the Lake of Reflection where he reflects upon who he is at Nirmala's request. Kion tells the Queen that according to Nirmala, Kion's scar may never fully heal, which Kion is distressed towarsds, believing he may not be able to control the Roar or lead the Lion Guard. Rani states that Kion may not need the Roar considering that it originated at the Tree of Life, and would have the opportunity to stay even if Kion leaves. Their moment is interrupted when Kely, the lemur and Heng Heng complain about their dispute over the bamboo forest, which the Queen quickly resolves. Kion goes back to reflecting, and Rani heads with the Guard on their patrol. During the patrol, Rani begins to get worried, thinking that Kion is as healed as he could get, but won't be able to lead the Lion Guard in his depressive state. The Guard agree to talk to him, whilst Rani heads in for some rest.

Unbeknownst to her, Mama Binturong overheard Kion and Rani's initial conversation, and staged an attack on the Tree of Life at sunset to side-line the Lion Guard and breach the Tree of Life. The Guard find out about this and manage to hold the intruders off until the Night Pride, sans Rani helps them defend them off. Rani, impressed at Kion's leadership skills, compliments Kion, stating that Fuli was right.

Triumph of the Roar

After succesfully defending the Tree of Life from another attack by Makucha and Mama Binturong, Nirmala announces that Kion is finally healed of Ushari's venom. Fuli suggests that the Guard return to the Pride Lands, which concerns Rani. Kion however, refuses to leave right away, sticking to his promise to patrol the Tree of Life during the day.

Rani is later shown resting in the cave, that is until Bunga and Makini unintentionally wake her up. Bunga asks Rani where Kion went and why he isn't ready to use the Roar again. Makini assumes that Kion is still working on the Roar, as his ancestor Askari did. Rani realizes that the Roar could finally return to the Tree of Life if Kion were to stay, and goes along with Bunga to talk to him.

Bunga and Rani find Kion at Cikha Escarpment where he is mastering the power of the Roar, to their atonishment and amazement. However, they later get an urgent message from Anga: Mama Binturong has allegedly brought reinforcements to attack the Tree of Life, and has imprisoned the Night Pride. Rani, Kion, and Bung arrive on scene, and Kion uses his most powerful Roar to defeat the villains in the final war for the Tree of Life once and for all. Grateful towards Kion for saving her kingdom, she asks him to stay.

Journey to the Pride Lands

While Kion is considering Rani's offer, Rani approaches him to ask if he has come up with his answer. The two lions then spend the day together walking through the Tree of Life and express their love for each other. Rani once again asks him to stay and this time also asks him to become her King, surprising Kion. Before Kion could answer, Bunga and the others arrive. The Lion Guard contemplates Rani's offer but is interrupted by Azaad, Jasiri, and Janja's arrival. The hyenas tell them that Zira and her pride have returned to the Outlands and are planning to attack the Pride Lands in Kion's abscence with her the help of her now-adolescent children, Vitani and Kovu.

Understanding that the Lion Guard still has the responsibility to defend the Pride Lands as long as they bear the mark of the Lion Guard, Rani bids them farewell and tells them that she has considered each one of them as a part of her pride. She bestows them the mark of the Tree of Life and tells them that they'll always be welcomed in Tree of Life. She and Makini watch them leave, with Rani waiting for their next visit.

Return to the Pride Lands

In the final episode, after Kion returns to the Pride Lands ,he tells Kiara about Rani, who senses his infatuation with the Queen. Kiara assures Kion that their parents would understand Kion's eventual choice to return to the Tree of Life.

After Kion passes the role of leader of the Lion Guard to Vitani, the spirit of Askari congratulates Kion on his mastering of the Roar by giving it up, but refrains from taking Kion's power away, seeing as the Roar's destiny now lays towards the Tree of Life. Several days later, the Pridelanders, Outlanders, and animals of the Tree of Life gather at the Tree to witness Rani and Kion's wedding, which doubles as Kion's coronation as the King of the Tree of Life. All the animals cheer in celebration as the new rulers roar majestically, beginning their reign as King and Queen.

The Disney Wiki has an article focusing on the relationships of Rani (The Lion Guard). 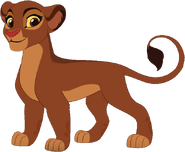 Rani leads the Nigh Pride.

"We protect everyone at the Tree of Life from those who might cause harm, like you and your roar."

Rani becomes queen of the Tree of Life.

How are we so different and still so much the same?

It's a feeling somehow knowing, There's nothing to decide.