Disney Wiki
Register
Don't have an account?
Sign In
Advertisement
in: Objects, Tangled objects, Articles of Clothing,
and 2 more

Sofia the First
Tangled: The Series

Rapunzel's Crown is a tiara that belongs to Rapunzel, given to her when she was an infant.

The crown is first seen being given to Corona's new born princess by the King of Corona and when she went missing it became a reminder of her to the Kingdom and it's King and Queen, keeping it safe until their princess returns home.

Eighteen years later it was stolen by Flynn Rider and the Stabbington Brothers for its gold and diamond value and Flynn took it for himself while he and the brothers were getting away from the guards. When he lost them, the thief found a hidden tower to hide in until the guards and the crazy white horse were gone, but he ended up being hit by a frying pan.

After the girl in the tower, Rapunzel, realizes that she can take care of herself, she finds the stolen crown in the man's satchel. Since she hasn't seen a crown before, it takes a while for her to find where it is suppose to go; on her head. When Rapunzel failed in her second attempt to get her "mother" to take her to and see the floating lights in person, she made a deal with the thief.

She'll give him back his satchel if he takes her to the lanterns and brings her back home unharmed. However, not long after they left, Gothel came back to the tower to find Rapunzel missing. She finds the crown because the sun shining its light on one of the crown's jewels.

Gothel later uses the crown to get the Stabbington Brothers to help her get Rapunzel back and get rid of Flynn. When Gothel confronts Rapunzel and tries to make her go back to the tower, Rapunzel refuses and confesses she is beginning to develop romantic feelings towards Flynn. In order dissuade Rapunzel and her growing romance, Gothel uses the crown again to convince Rapunzel that the crown is all Flynn cares about and will leave her the second he gets it back. Although Rapunzel stays firm on her decision, Gothel's plan is put into motion as Rapunzel begins to wonder if she really could trust Flynn after all, questioning if he would really stay or leave her once she hands it back to him.

The next night when Rapunzel's dream of seeing the flowing lanterns in person finally came true and was about to sent her own up with Flynn/Eugene, she gave the tiara back to him and told him that she was no longer scared of him, but Eugene put it aside. The crown's value no longer means anything to him; only she matters.

Eugene later gave the crown to the Stabbington Brothers, so they would leave him and Rapunzel alone, but they knocked him out, tied his hands and the crown onto a small ship's helm and send them both to the castle. The brothers later went up to Rapunzel and made her believe that Flynn told them about her hair so they would let him keep the crown for himself: Gothel knocks the brothers out before they could grab her. Her plan to make Rapunzel believe that greed for the crown's jewels is more powerful than love worked as she brought her flower back to the tower, while the royal guards got the crown back and locked Eugene and the brothers up for stealing it.

At the tower Rapunzel was having flashbacks of her birth family, seeing a picture of her infant self and seeing herself as a princess in the mirror while wearing the crown; she realized that the crown was hers and that she was the Lost Princess (and that Eugene choosing the crown over her was a lie). Later it was placed back on her head after Eugene had escaped, saved and brought her back home to her real family. But from time to time Eugene still uses his thieving Rider skills on it to tease Princess Rapunzel.

Rapunzel is seen wearing her diamond tiara on top of her long golden hair in "The Curse of Princess Ivy", when Sofia's amulet calls her to Sofia and Amber's aid.

A painting of Rapunzel's crown is seen in the prologue of Tangled: Before Ever After, while the crown itself spends most of the time on a cushion. It was about to be placed on Rapunzel's head at her coronation, but Lady Caine unleashed her attack before the bishop could fully crown her. King Frederic later gave Rapunzel back her crown after their talk about her hair and that she needs to stay within the kingdom's walls.

Baby Rapunzel wearing the crown for the first time

Rapunzel giving the crown back to Eugene

Rapunzel wearing the crown as a Princess

Eugene teasing Rapunzel with the crown

The crown in the prologue of Tangled: Before Ever After

The crown in Tangled: Before Ever After

The crown returned to Corona in "Big Brothers of Corona"

Brock Thunderstrike's reflection on the crown

Brock Thunderstrike trying on the crown

Rapunzel wearing the crown in The Curse of Princess Ivy 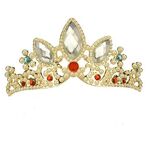 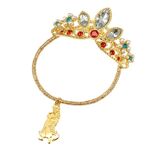 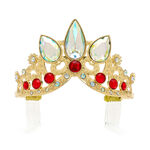 Merchandise crown for the TV series