Ratatouille is a video game based on the Pixar film, Ratatouille (2007). It was developed at Heavy Iron Studios and released by THQ, Nintendo (GameCube only) and SCEA (PS2 and PS3 only) on June 26, 2007, two days before the first theatrical release in Russia. Ratatouille was initially released on twelve systems—Wii, Nintendo DS, PlayStation 3, PlayStation 2, PSP, Xbox 360, Xbox, Nintendo GameCube, Game Boy Advance, Windows, Mac OS X, and Mobile—making it the most comprehensive simultaneous cross-platform launch in THQ's history. It was the last Pixar game to be released on Xbox, GameCube, and Game Boy Advance.

Disney announced on November 6, 2006 that they planned a Ratatouille video game release, which would coincide with the movie's release.

Several of the actors from the film voice their characters in the game.

Similar to the plot of the movie, Remy begins in the farm setting in which the film starts as well. Remy goes off with his brother Emile to retrieve apple cores for his father. On the trek he is taught the basic skills he will need to know so that he can accomplish what he faces later on. After the task, the old lady living in the farm catches Remy and Emile, alerting the colony, thus forcing them to escape. After Remy successfully escapes the shotgun-wielding woman, he is caught in the rapids of the sewers, and he wakes up in front of Gusteau's restaurant, where a small ghost of Gusteau guides Remy to the top of the restaurant, where the rat witnesses the garbage boy, Linguini, attempting to fix the soup he accidentally spilt by scrambling in a bunch of random ingredients. Remy drops in and fixes the soup, but Linguini witnesses him, thus beginning a chase outside with Linguini on pursuit. After that Remy joins Linguini and helps him with what he is forced to do for Skinner, the chef. The next day Remy helps Linguini cook the food for the customers while he helps his colony, which he reunites with, in the meantime. Skinner catches Remy, and another chase is on. Later, Remy helps his colony steal prized foods at the market. After that, the food critic Anton Ego, also known as the "Grim Eater," has arrived at Gusteau's for a review; one that will be very important to the cooks. However, they all leave after finding out about Remy. Now it is up to Remy, Linguini, and the chef Colette to cook for many people, even the critic Ego. Can they do it?

In this version, it only uses 2D graphics (side view and top view). Remy has limited lives, can glide and collect things to help complete the level and passwords when completing levels. Some parts of the level have timers.

The PSP version's plot is after the events that occurred before. About to open their new restaurant La Ratatouille, Remy's recipes are stolen and he, with the help of his colony (including one teen rat who always wants to challenge him to race with him) must find the recipes by exploring Linguini's Apartment, the Sewers, a nearby Marketplace, the Rooftops, and (Skinner's) Kitchen. Enemies include many insects, amphibians, rodents, and "flyers" such as bats and crows, and also bosses like Skinner (who is still enemies with Remy despite closing down Gusteau's), a giant sewer turtle and giant crows, who try without delay to stop him.

In this version, Remy cannot sniff (though he can skitter and look around by pressing the up button of the d-pad), run on a ball (though he can jump on a balloon or jump from bouncy surfaces), distract enemies by throwing them explosives, and use an umbrella to glide. However, he can swim, and he can buy the skill of diving from Pierre the Merchant (who also sells upgrades).

In this version, Remy can't swim, but he can use a raft to paddle when the player swings the Wii Remote (uses the analog stick in PS2). This video game only has 13 levels. Dreamworlds are bonus levels in which Remy falls asleep and dreams of a land of food. If the player loses all lives of falling Remy wakes up. The Dreamworld can be accessed when a mission is completed. There are usually 3 dreamworlds in each level (with the exception of Little Chef, Big Kitchen with only one dreamworld). There are also levels in which Remy slides a pipe.

7. The City of Lights (There's an escape part where Remy escapes Linguini)

11. The City Market (Remy escapes Skinner again, and the old lady, Mabel, is back from Somewhere in France)

12. The Slide of Your Life (This was the final slide)

13. The Desserted Kitchen (It takes us back from Little Chef, Big Kitchen, and this was a final chase from Remy and Skinner)

1. That's a Loot of Fruit (Found in The City of Lights)

3. Say Cheese! (Found in The City of Lights) 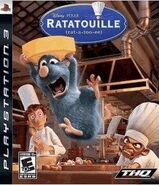 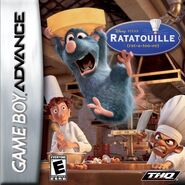