The Ratcatcher is a motorcycle seen in almost every episode of the Darkwing Duck series. It is Darkwing's main mode of transportation.

In "Darkly Dawns the Duck", it is shown to be very large (to the point where it is almost taller than Darkwing) with a small sidecar positioned near the back. However, as the series progressed, it was shown with a smaller body and a slightly larger sidecar. It is very fast.

Its front fender is shaped like Darkwing's head, similar to the Thunderquack. It also has a pair of large exhaust pipes coming up past the back fender. It has two small headlights, as well as one big headlight on the sidecar.

The Ratcatcher also, like most cartoon vehicles, appears to be nearly indestructible. In fact, it has only been extremely damaged on two occasions, once when it fell off of Bushroot's giant plant and once when Darkwing drove it into Stegmutt's tail.

In the original opening scene to "Darkly Dawns the Duck" (cut from reruns and the DVD release), Darkwing is shown riding the Ratcatcher off a makeshift ramp, into the back of a criminal's pickup truck, catapulting the drivers out the truck's windows into a trash can.

Negaduck owns an alternate version of the ratcatcher. Like Darkwing and Negaduck, the alternate Ratcatcher looks exactly like the original Ratcatcher, but with a different color scheme. It has a yellow front fender, red headlights, a black body and windshield, red exhaust pipes, and a black and red sidecar. 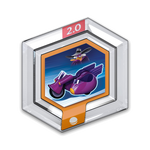