Raven's Point is a location featured in the 2020 Disney/Pixar animated feature film, Onward. It is the place where Ian and Barley continue their quest to find the Phoenix Gem.

Raven's Point lies in the Path of Peril area according to Ian and Barley's map. The area is located in a dangerous mountain near the Path of Peril. Most of the objects seen here are raven statues. A river and a dark chamber lie within this area. The dark chamber inside features skeletons of dead knights, which are about 1,000 years old, followed by a gauntlet of obstacles.

After activating a drawbridge lever in the Path of Peril area, Ian and Barley look at a raven statue to which the clue to finding the Phoenix Gem is linked to Raven's Point in the mountains just as Ian and Barley decide to follow the path where the raven statues are pointing. Planning to get the Phoenix Gem, Colt Bronco prepares to escort them home just as the brothers ride their van across Raven's Point just as Colt calls the police squadron for backup. Just as Colt's police squadron arrives, the two arrive at the Raven's Point area upon seeing a raven statue. Noticing a dead end as the brothers cannot continue, Barley sacrifices his van Guinevere to avoid getting arrested by the police by causing debris to block their path in the Path of Peril area. Ian, Barley, and their father arrive at Raven's Point to proceed further. Upon arriving, Ian grabs a flower-shaped piece from a raven statue giving them a clue which is linked to a dangerous river and an X marking the Phoenix Gem just as the gang arrives at a gauntlet.

Thereupon, the three go past three unicorns to continue their way to the Phoenix Gem as the three discover a prophecy of magic inside the gauntlet. Ian notices he has only five hours and forty-two minutes left to revive his father. In order to cross via water, Ian and Barley work together to use a Cheese Puff to help them continue their journey, using the Cheese Puff as a boat and along the journey, they discover multiple wizard statues in another section of the river. Upon crossing the river, the two and their father arrive at a dark chamber just as Ian finds out he only has two hours and thirteen minutes left to revive his father. Arriving in the chamber, the two witness an enormous gelatinous cube falling below. Escaping from the cube, the two and their father survive a gauntlet of obstacles, followed by rising water. Noticing the same star symbol like the one the brothers saw in the bottom, Barley dives underwater and activates a hatch to lead to another area, but the hatch closes. Wilden Lightfoot manages to press the same switch with help from Ian as the water fills the whole area. The two manage to escape the gauntlet and go to the spot where the Phoenix Gem is supposed to be, only to find out that the elf brothers are at New Mushroomton again via manhole.

After a brief argument with Ian, Barley uses the flower-shaped piece from the final raven statue on the fountain which he had earlier and tried to protect from a construction site. 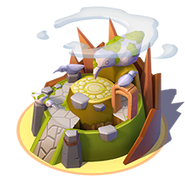 Retrieved from "https://disney.fandom.com/wiki/Raven%27s_Point?oldid=4267251"
Community content is available under CC-BY-SA unless otherwise noted.