Miranda Maday (2020-present)
Raven-Symoné Christina Pearman, known professionally as Raven-Symoné or simply Raven, is an American actress, comedian, model, singer, songwriter, dancer, television producer, and television host, best known for her starring roles as Olivia Kendell in The Cosby Show, Raven Baxter in the hit Disney Channel television series That's so Raven and its successor, Raven's Home, Galleria Garibaldi in The Cheetah Girls films, and as the voice of Iridessa in the Disney Fairies franchise.

Her first appearance in a Disney-related production occurred in 1990, when she made an appearance in the special, The Muppets at Walt Disney World, where she sang a duet of "The Rainbow Connection" with Kermit the Frog in an attempt to cheer him up after he was separated from the other Muppets.

That's So Raven remains Symoné's most renowned and successful role to-date. She was acknowledged with critical acclaim for her energy, natural acting skills, and contagious humor.

Later in 2003, Symoné was chosen for the role of Galleria Garibaldi in the Disney Channel Original Movie, The Cheetah Girls. Symoné was critically praised for her acting and vocal talent in the first two films, but because she was filming College Road Trip, she was unavailable for the third film.

Symoné has appeared in several other Disney films, including Nebula Wade in Zenon: Girl of the 21st Century, Princess Asana in The Princess Diaries 2: Royal Engagement, Mel Porter in College Road Trip, and Iridessa in the Tinker Bell movie series.

Symoné has also appeared as various recurring or guest characters in several other Disney Channel television shows, including Stephanie in The Proud Family, Monique in Kim Possible (and its related film series), Maryanne Greene and Alexandrina Quarry in Fillmore!, Raven Baxter in Cory in the House (a spin-off to That's So Raven), Amber Algoode in Sonny with a Chance, and Valkyrie in Guardians of the Galaxy. Additionally, she appeared as Raven Baxter in That's So Suite Life of Hannah Montana, a crossover episode of That's So Raven, The Suite Life of Zack & Cody, and Hannah Montana.

She also guest starred in the Disney Channel reality series PrankStars, appeared in the Bill Nye the Science Guy episode about human transportation, and guest-starred as Playground Monitor Hero in Higglytown Heroes. Additionally, she played Simone in K.C. Undercover and Rhonda Johnson in the ABC TV show, Black-ish.

In Summer 2017, Symoné made her return to Disney Channel as the now grown-up Raven Baxter in the Disney Channel Original Series, Raven's Home. She also voiced Maria Media in Big City Greens and played Betsy Hagg in Just Roll With It. Additionally, she directed the Sydney to the Max episodes "Mrs. Harris' Opus" and "My Cousin Lexi".

Apart from having released four studio albums, Symoné has been very musically active in other Disney musical media. Symoné generally performs music within the pop/R&B and hip hop genres.

In 2003, Symoné released her first soundtrack album with The Cheetah Girls for their debut film, and a second in 2006. On the second album, Symoné recorded a solo track entitled "Do Your Own Thing." A third soundtrack was released in 2008, however, Symoné isn't heard on the soundtrack, due to the fact that she doesn't appear in the film. It is sometimes stated that Symoné was a member of The Cheetah Girls. This, however, is incorrect because Symoné was only hired for theatrical purposes, and was never intended to be part of the girl group.

Later in 2003, Symoné recorded a modernized rendition of The Lion King classic, "Circle of Life", alongside Disney Channel Circle of Stars.

Raven has made a vocal appearance on several other Disney soundtracks, including The Haunted Mansion, The Lion King 1½, The Princess Diaries 2: Royal Engagement, Ice Princess, and College Road Trip.

Raven Baxter
(That's So Raven, That's So Suite Life of Hannah Montana, Cory in the House, and Raven's Home) 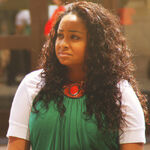 Amber Algoode
(Sonny with a Chance)

Raven-Symoné as Stymie's girlfriend with Stymie in 1994 family comedy film, The Little Rascals.

A young Raven-Symoné with Kermit the Frog in The Muppets at Walt Disney World.

From left to right: Sabrina Bryan, Kiely Williams, Raven-Symoné, and Adrienne Bailon as The Cheetah Girls.

Raven Symone and Martin Lawrence at the premiere of College Road Trip in March 2008.

Raven Symone at the premiere of Fox's Empire in January 2015.

Raven-Symone in a Disney Channel Wand ID in April 2017.

Raven-Symoné and Anneliese van der Pol at the premiere of The Lion King in July 2019.
Español Português do Brasil
Community content is available under CC-BY-SA unless otherwise noted.
Advertisement