This article is about the Raven from Snow White and the Seven Dwarfs. For other characters, see Raven.

The Evil Queen †
The Raven is a minor character in Snow White and the Seven Dwarfs. His purpose in the film is as someone for the Evil Queen to speak to (mostly as the Witch) in order for plot points to be conveyed to the audience. He appears to be intimidated by the Queen, in both of her forms.

The raven is one of several characters used to interact with the Queen to add conviction to her character. Joe Grant knew the work of Wilhelm Busch, and it is likely that he was inspired by an 1894 Busch illustration of a raven perched on a skull.[1]

A deleted short sequence involving the Witch stirring her cauldron was fully animated and completed, and was among the scenes cut from the film by Walt Disney at the last minute. In the sequence, the raven looks on as the Witch stirs the cauldron with a huge bone. She pauses to see that the smoke rising from the brew is shaped like skulls, and adds a drop of an unknown ingredient to the concoction:

The raven seems to live in the Evil Queen's laboratory in the dungeon as her pet. When first seen, he is sleeping, perched on a skull; he wakes when she enters and is startled by the effects of the ingredients of her potion. He is frightened by the Queen in her Witch form, and hides in the skull, peering out of its sockets. He watches the Witch preparing the Poisoned Apple, and as such is terrified when she, as a cruel joke, offers him the apple. The Raven is finally seen after the Witch leaves the castle, leaving his fate uncertain.

Re-imagined as a talking raven (quite similar to Ratface), the Raven was featured in several Disney comics. His most notable role was in the 1978 story The House Guest, where he is chased away from her house by the Evil Queen for having meddled with the Magic Mirror. Lamenting he'll have nowhere to spend the night, the Raven is taken in by Chip and Dale, but proves to be an extremely problematic guest.

He has made three cameo appearances in the show. In the series, he takes the role of Regina's messenger. Like in the original movie, he seems capable of understanding human's language.

Interestingly, the first time he has appeared was in "Into the Deep", but this time he wasn't Regina's messenger, but Cora's (who is Regina's mother in this series). After capturing Aurora, Cora tries to exchange her for a magic compass that could lead Mary Margaret/Snow White and Emma back to Storybrooke. She knows that Snow and Emma would never let her die. Cora order her Raven to deliver the message to Snow White.

He appears once again in season four in "White Out". After Maid Marian comes back from the past and Robin Hood makes up with her for Roland's happiness, Regina is devastated. So much so that she uses the Raven to deliver a message to Henry, in which she explain that she doesn't want anyone to visit her.

He appears again in Season 6, when Regina delivers a false message to distract Zelena to surprise the Evil Queen and Gold in intimate relation, while Emma, her parents, Hook and Blue search a way to trap the Evil Queen.

The Raven makes an appearance in all 4 versions Snow White's Scary Adventures. He can be seen peering through the cottage window with the Queen along with reacting to the Queen's transformation and at the cauldron.

The raven also appeared in World of Color: Villainous at Disney California Adventure.

The Raven struggling against the blast of wind

Scared by the Queen's hideous disguise

The Raven watches the Witch leave.

The Witch and the raven in the deleted scene

Joe Grant's design for the raven 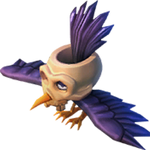