Mrs. Kipling (lizard)
Ravi Gupta Balasubramaniam Ross is a main character in Jessie and its spin-off, BUNK'D. He is a 16-year-old Indian adoptee imbued with his Eastern culture, but is thrilled with his new life in America. He is the smartest one of the bunch. His first language is Hindi, but he is able to speak English too.

Ravi is originally from Kolkata, India before being adopted by the Ross family a month before the events in "New York, New Nanny". He is eager to learn American culture and loves his seven-foot Lizard, Chris Harvey. He seems to get pranked a lot by his brother Luke and his younger sister Zuri. Ravi's first language is Hindi but knows how to speak English very well. He is really fun and loves family. It is possible he is from Calcutta, in British India, as shown in Used Karma. Ravi and Mr. Kipling watch The Real Housewives of New York but more often watch The Real Housewives of New Delhi for a real catfight as told in, "The Talented Mr. Kipling". He found Mr. Kipling in a swamp in India. And he did what any other boy would do to a rare Indian egg- sit on it until it hatches.

Ravi is a precocious child. He loves video games, along with Luke. He is against violence, as seen in "New York, New Nanny". He loves his new life in New York but is fluent in Hindi, shown in "The Talented Mr. Kipling" along with not being good in a crisis. Ravi worries about other people as seen in "Creepy Connie Comes a Callin'" when Bertram was supposed to be taken by a black shadow. In the episode "Are You Cooler Than a Fifth Grader?", it is revealed that he has a crush on Selena Gomez, saying that his peppers are hotter than her, and then saying, "I love you, Go-Go." 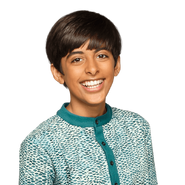 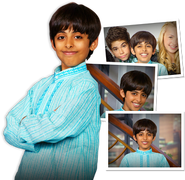