Raymond Wallace "Ray" Bolger was an American actor, singer, and dancer, who portrayed the crooked villain Barnaby in the musical film, Babes in Toyland. He also appeared in an episode of Walt Disney's Wonderful World of Color ("Backstage Party") with Annette Funicello and Tommy Sands in a promotional effort for the film. Additionally, he narrated the album, The Story of the Scarecrow of Oz. He was once considered for the role of Bert in Mary Poppins and was considered to voice Little John in Robin Hood.

Bolger began his career through vaudeville before finding work in cinema with his most famous role being the Scarecrow and farmhand Hunk in the 1939 musical film, The Wizard of Oz.

His other film credits included The Great Ziegfeld, Sweethearts, Rosalie, Stage Door Canteen, The Harvey Girls, April in Paris, That's Dancing!, The Daydreamer, and Where's Charley?, where he reprised his Tony Award winning role from Broadway. His other Broadway credits included Life Begins at 8:40, On Your Toes, By Jupiter, and All American.

His television appearances included The Jean Arthur Show, The Partridge Family, Little House on the Prairie, Battlestar Galactica, Fantasy Island, The Love Boat, Diff'rent Strokes, and was also the host of his eponymous television show, The Ray Bolger Show from 1953 and 1955, originally known as "Where's Raymond?" Bolger also appeared in commercials for Safeway Supermarket's "Scotch Buy" brand and "Dr. Pepper".

He died five days after his 83rd birthday. 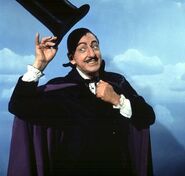