Karsen
Raymond Allen "Ray" Liotta is an American actor well known for his distinctive raspy Jersey voice. He is best known for his roles as Shoeless Joe Jackson in the 1989 fantasy-drama film, Field of Dreams, as Henry Hill in the 1990 crime film, Goodfellas, and as protagonist Tommy Vercetti in the 2002 video game Grand Theft Auto: Vice City. He also played Mike Wozniak on the CBS drama series Shades of Blue.

His Disney roles include Captain T.C. Doyle in Operation Dumbo Drop, Jack Devine in the 2004 Touchstone Pictures film, The Last Shot, Jack in Wild Hogs, Principal Luger in the Hannah Montana Forever episode "Hannah Montana to the Principal's Office", Major Liotta in the Phineas and Ferb episode "What A Croc!", and Big Pappa in Muppets Most Wanted. 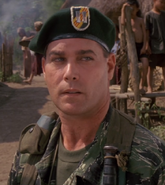 Major Liotta
(Phineas and Ferb)
Add a photo to this gallery

Ray Liotta with Kermit the Frog, Miss Piggy, and Pepe the King Prawn.

Ray Liotta speaks onstage at the Shades of Blue panel during the CBS portion of the 2017 Winter TCA Press Tour.

Retrieved from "https://disney.fandom.com/wiki/Ray_Liotta?oldid=3968005"
Community content is available under CC-BY-SA unless otherwise noted.