Welcome to Spookyville
Re-Villains! (previously known as Let's Go, Villans!) was a parade held during the Disney's Halloween event at Tokyo Disneyland, as part of its 25th anniversary celebration.

The park hit the parade under the title Let's Go, Villans! in 2008 and renamed as Re-Villains! in 2009, with its upbeat soundtrack and colorful costumes. During the show stop, Maleficent (2008)/Ursula (2009) led the villains to "crash" the party and take over the parade in a fun little battle for those who would rule Halloween.

The parade floats and the dancers' outfits are themed to eight villains (only six in 2008), listed below:

The nighttime version of the parade has the villains in the spotlight. During the show stop, Mickey and his friends "come" to the party and "save" the parade in a fun little battle (similar to the daytime) for those who would rule Halloween. After the villains are defeated, Mickey tells Maleficent (2008)/Ursula (2009) about the true meaning of Halloween spirit.

The parade features eight villains (only six in 2008, same as the daytime version), listed below: 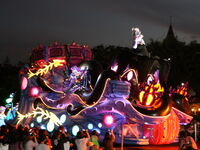 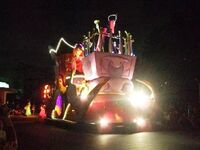