"Rebel Assault" is the sixty-eighth episode of the Disney XD animated series Star Wars Rebels. It premiered on November 13, 2017 and is the ninth episode in the fourth season.

With a huge Imperial blockade surrounding Lothal, ready and waiting, Hera Syndulla leads a squadron of twenty-four fighters, a mixture of X-Wings and Y-Wings. Their mission is to destroy the Imperial factory on the surface, but they will have to get pass the blockade first. The Rebels move in and engage incoming TIE Fighters. Meanwhile, the Rebels on the surface plant explosives and destroy gun towers that protect the factory. Though outnumbered, Hera's squadron puts up a good fight against the TIEs. Among the Rebel Pilots are Mart Mattin and his droid, R3-A3. Just then, Vult Skerris joins the fight in a TIE Defender. He easily takes out two X-Wings, and then pursues Hera. She finds herself outmatched by Skerris' TIE. So she takes a daring move by charging towards one of the Star Destroyers. Thrawn sees her cunning plan, and orders Skerris to break off his pursuit. Skerris refuses to break off, which to Thrawn is unfortunate for him. With nothing more to say, Thrawn gives the order to open fire on Hera, even though Skerris will be in the line of fire. Hera's shields are taken out, and so are Skerris'. With Skerris now vulnerable, Hera makes her move. She flies over Thrawn's Star Destroyer while Skerris goes around. Then out of nowhere, she takes a shot at Skerris, and causes him to crash into a Light Cruiser which collides into another Star Destroyer. The Rebels have their opening, and break through the perimeter surrounding Lothal. However, as they enter the atmosphere, another squadron of TIEs intercept them.

The Rebels on the surface are far outside the Capital, waiting to see Hera's squadron fly over. They spot them, but discover all fighters have been destroyed. A few manage to crash land into Capital City, including Hera. When Thrawn hears word of this, he orders Rukh to capture the pilots alive, especially Hera. In the city, Hera and Chopper retreat into the city streets with Imperials on the look out for them. Chopper is unable to contact Kanan with a damaged transmitter. Meanwhile, Kanan instinctively decides to go back to save Hera alone while the Rebels head back to base. At the same time, he crosses paths with a Loth-Wolf. Rukh has already caught one Rebel Pilot, and brings him to Governor Pryce for interrogation. After hearing that Hera is on the run, she orders the whole district to be locked down, and have it torn apart building by building until she is found.

Roaming the streets and dodging Imperial forces, Hera and Chopper find Mart and save him from Stormtroopers. Unfortunately, his droid is immobilized while trying to protect Mart. They fit R3's transmitter onto Chopper, but even though it works, he cannot send a signal due to the Empire jamming all frequencies. So the three of them get moving, but get attacked by Rukh. Leaping from building to building, Rukh chases Hera, Mart, and Chopper through the streets, looking for the nearest sewer hatch. He engages them in physical combat, and easily overpowers the two pilots, only for him to retreat when Chopper electrifies him. They find a sewer hatch, only to find it guarded by a walker and two Stormtroopers. In order to get to it, Mart lures the Troopers and the walker away by getting them to chase him. Chopper moves in to open the hatch, and Hera uses a speeder to knock the walker down. Chopper gets the hatch open, and the three of them head down into the sewers. However, Rukh shows up and engages Hera. As reinforcements move in, Here orders Mart and Chopper to leave without her, and they reluctantly do so. Hera puts up a fight, but Rukh beats her just as Governor Pryce shows up, who stuns her after a first meeting.

By morning, Mart and Chopper make it out of the city, and meet up with Kanan. They tell him that Hera has been captured, and both express their regret for leaving her. Kanan assures no one is at fault, with confidence that there is still a chance to save her. 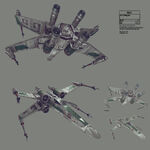 Retrieved from "https://disney.fandom.com/wiki/Rebel_Assault?oldid=4087525"
Community content is available under CC-BY-SA unless otherwise noted.