$10,000,000
Recess: School's Out is a 2001 animated film based on the Disney television series Recess. This film was produced by Walt Disney Pictures and was released theatrically nationwide on February 16, 2001. It was released on video and DVD on August 7, 2001.

When the diabolical Dr. Phillium Benedict and his Anti-Recess Army threaten to cancel recess forever in an effort to raise U.S. Test Scores, T.J. Detweiler and his pals spring into action. While investigating the peculiar happenings at the thought-to-be-vacated Third Street School, T.J. and his friends discover Benedict has a plan more sinister in store—he wants to destroy Summer Vacation by altering the weather and creating Permanent Winter!

The Last Day of School

The story begins at a U.S. Military Base. One of the technicians there tells a fellow employee he couldn't seem to get the Photon Channeler working, but the employee tells him he'd better figure it out. While working, several vans crash through the gates of the Base. One of the workers tries to erase the access code, but the intruders enter. Several men in sunglasses secure the perimeter, and a scary-looking man enters the scene, and aims a device at the terrified workers and activates it, electrocuting them and rendering the workers unconscious.

At Third Street School, Principal Prickly does the morning announcements which make all of the students laugh. But it's not really Principal Prickly—it's T.J. imitating him using the Voice-Changing Machine from the episode The Army-Navy Game!

The Gang Goes To Camp

All of T.J.'s friends go to summer camp but he is stuck at home.

As he is riding his bike, T.J. thinks he could not believe he sunk so low to be scheduling a play date with Randall. While passing the school, he spots a strange green glow emanating from the windows of the building. T.J. stops to see what is going on, but before getting the chance to investigate the peculiar happenings, he is ambushed by the scary-looking man from the Military Base incident, but T.J. escapes. The man loses his breath after T.J. escapes. Later that night, T.J. asks his parents what they use a school for during summer. Mr. Detweiler tells him that they close it. T.J. explains he saw the scary-looking man at the school while he was riding by, and thinks something really strange is happening.

The next day at the school, T.J. monitors the peculiar happenings. He peeks through his binoculars and spots several vehicles approaching and parking outside the school. After seeing the green glow in the windows, T.J. decides to get a closer look. He peeks into the cafeteria windows and watches scientists use a laser to levitate a safe. T.J. rushes back to his house and tells his parents about what's going on, but no avail (his parents thinking T.J. is coming down with something after running into the sliding glass door), so T.J. heads to the Police Station, but the police laugh at his report. T.J. leaves the station, and finds Principal Prickly heading for the West Side Gold Course.

Campers By Day, Spies By Night

Since T.J.'s parents and the police won't believe his reports, this leaves T.J. no other choice but to get help from his friends. He barges into Becky's room and asks Becky for a ride to Chesterville, where Vince's camp is located, but Becky refuses, but T.J. forces her to do it, otherwise he'll put her diary on the Internet, and he isn't worried when Becky takes it back—he's got copies.

Vince tells T.J. that he was right—something strange was going on inside, and they think Principal Prickly is in on the plot. T.J. decides if they're going to get proof, they'll need to watch the school every night until something goes on. When the bad guys make a move, they'll catch them red-handed by taking pictures of what's going on, then they call in authorities, and they'll have them right where they want them. If they are going to do their mission, they will have to do this as campers during the day and spies during the night (During the daytime, T.J. will have Becky drop the kids off at their camps, and as dusk comes, T.J. will have Becky pick them up again).

Vince tells the everyone they must leave fast, but Mikey has the feeling. He tries holding it in, but is unable to. He lets out an unusually large burp, causing the ventilation duct to collapse. Benedict sics his henchmen on T.J. and his friends and they make a run for it all over the school. During the chase, T.J. and friends try to find their way out, but most of the exits lock off. After running into several Foot Soldiers, Ninjas, and the Ugly Bald Guy, they find their way out. The other five make it out, but not T.J. -- he is caught by Benedict's men. Before getting the chance to rescue T.J. the ninjas chase them. At the same time Ms. Finster gets unstuck, she spots T.J.'s friends running from the Ninjas and wonders what is going on.

After being captured, T.J. is tossed into the broom closet, where he finds Principal Prickly held prisoner. As T.J. tries to free Principal Prickly from the ropes, he tells him that his friends will free them. Currently, the gang is telling the police about what they saw during their infiltration, but the police continue to be oblivious after they heard T.J.'s previous police report. As T.J. unties Principal Prickly, Phillium Benedict enters the scene to interrogate T.J. and Prickly. While being interrogated, Prickly persuades Benedict to set T.J. free, but Benedict refuses, because he found out about his secret experimental night school. After Benedict leaves, T.J. asks Principal Prickly how he knows Benedict and Prickly tells T.J. the origin of how he got his Principal Job. Then, T.J. becomes anxious to fight after hearing Benedict's plans to abolish recess.

Prickly and T.J. discover that Benedict is planning on destroying summer vacation by using a military device to create an ice age, therefore making summer winter.

The kids get ready to begin phase two. Gus, Vince and Spinelli head for the auditorium doors and toss Water Balloons at the Foot Soldiers guarding the doors. The kids make a run for it and scatter in different directions as the Foot Soldiers and Ninjas chase Vince, Gus and Spinelli around the school (the Foot Soldiers chasing Gus and Vince and the Ninjas chasing Spinelli, respectively). The soldiers chasing Vince are trapped by the Ashleys, the soldiers chasing Gus are pummeled by balls being thrown by the students, and the ninjas chasing Spinelli are attacked by the kindergartners. After this, Gretchen rushes to a nearby broom closet, and disables the power supply to the auditorium. Benedict is aware of the situation and instructs Fenwick to get the power going again.

After Gretchen locks Fenwick and some of the technicians in the broom closet, they rush to the auditorium, only to be confronted by the Ugly Bald Guy. As the Ugly Bald Guy prepares to finish T.J. and his friends for good, T.J. and Principal Prickly, after getting rid of their disguises, appear above them and dump a pot of Corn Chowder on him, and drop the pot on him. The kids are glad to be reunited with their friend and learn that Principal Prickly is fine. Seeing as how the Ugly Bald Guy is lacking sight because of the pot being dropped on him, he careens down the stairs. There's six minutes left to perigee, so the kids and Principal Prickly head for the auditorium to face Benedict.

Benedict's technicians get the power in the auditorium going again, but right before trigger time, the students and Principal Prickly barge into the auditorium and confront Benedict.

Law enforcement officers swarm the school, and haul Benedict and his henchmen to prison. T.J. tells Becky he heard about how she saved his life and decides to return her diary. It also turns out T.J. was bluffing about the copies of the diary he stored in his treehouse. Vince, Gus, Gretchen, Spinelli and Mikey tell T.J. that they have plenty of time for preparing for their futures, but only have a little time left for just being kids, so they decide to spend the rest of their summer with T.J.. The gang heads to the pond to skip some rocks, but before heading to the pond, T.J. tells his friends he forgot something inside. T.J. wants to thank Principal Prickly for everything he did for him—quitting his golf game, telling Benedict to set him free and helping him save the world. Prickly tells T.J. he should be thanking him because T.J. did Prickly a favor getting him dragged into this mess, because he did his principal job so he could help kids and he had forgotten it, until he helped T.J. and his friends save the world. Prickly tells T.J. to have fun while he can during the summer, but one thing T.J. should remember—he still has a meeting with Principal Prickly come September. Principal Prickly has not forgotten the Saggy Butt Comment.

A soundtrack was released in late 2000, a few months before the movie came out. Like An Extremely Goofy Movie, most of the songs were played in the background and were not sung by the characters (except in the credits), and the songs (with the exceptions of the songs in the credits) weren't new songs; instead, they were all hits from the `60s.

The film was released on DVD and VHS on August 7, 2001. The video marked the debut of the 2001 Walt Disney Home Entertainment logo, however, the DVD used the 1991 logo. Both the VHS and DVD are out of print (due to the show's cancellation, as well as for VHS, the format going out), though the DVD continues to be sold in certain stores. Unfortunately, there are currently no plans for a re-release on DVD or a Blu-ray release. 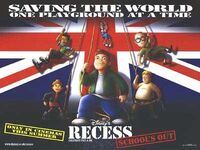 Retrieved from "https://disney.fandom.com/wiki/Recess:_School%27s_Out?oldid=2783970"
Community content is available under CC-BY-SA unless otherwise noted.