Programs, Kevin Flynn
Recognizers are vehicles in the Tron franchise.

These floating vehicles, colloquially referred to by the public as "stompers" for quite some time, take the place of the tanks at higher levels in the tanks game. The designation "recognizers" was used very sparingly in the film and many viewers might have therefore been unaware of the proper name. In the film, the Recognizers were the vehicles that attempted to stop the light cycles from escaping the game grid by "stomping" on them, and one of these vehicles was also the type of machine that Flynn "resurrected" with his user powers.

Recognizers do not fire at the player's tank at all but move at high speed, relentlessly converging on the player's location, and each still requires three shots to be destroyed. They can use a spotlight from the top of the recognizer to help search in darker areas of the grid.

In the real world, Recognizers appear in the video game "Space Paranoids".

In the game, Recognizers have been long out of date and generally only serve as tuggers and cargo ships in the digital world.

In Tron: Legacy, upgraded Recognizers are used to locate and transport rogue programs. They are either taken to the games, rectified (reprogrammed) or to be derezzed, Recognizer's main body can be lowered to allow access on the ground. They also provide an escort for the Throne Ship.

Getting ready to stomp 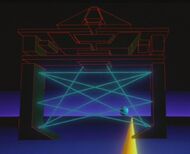 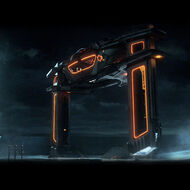 The recognizer as it appears on the cover for the Tron: Uprising album

A Recognizer in Disney Infinity