Duck Avenger, Iron Gus and Clover Leaf (cousins)
Red Bat is Fethry Duck's superheroic alter ego. He is one of the characters created for the Disney Studio Program by Dick Kinney and Al Hubbard. He appeared in the Fethry comic series, and was first used in the story "The Health Nut", published on August 2, 1964.

Role in the comics

Since the early 1970s, Fethry has occasionally donned superhero garb and called himself the Red Bat (not related to the villain of the same name whom Mickey Mouse faced in his heroic guise as "Plastic Mickey"). Occasionally, Gloria, Fethry's girlfriend (created by Gerson Luiz Borlotti Texeira), would team up with the Red Bat as another costumed crime-fighter called the Purple Butterfly (Borboleta Purpurea). Even Fethry's nephew, Dugan, has donned a costume and called himself Red Bat Junior. 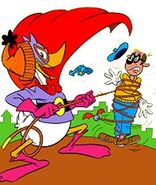 Add a photo to this gallery
Retrieved from "https://disney.fandom.com/wiki/Red_Bat?oldid=3968039"
Community content is available under CC-BY-SA unless otherwise noted.